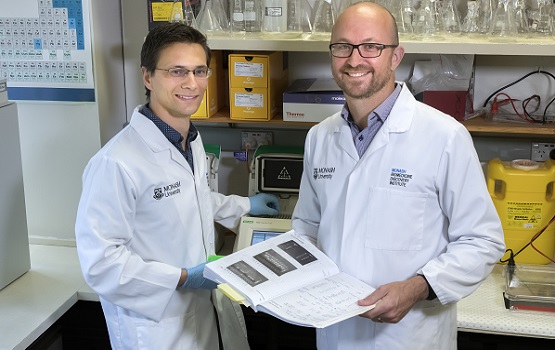 Scientists have discovered a molecular switch in the brain that regulates fat burning – and could provide a way to control weight gain following dieting.

Monash University researchers have identified a molecular switch in the brain that potentially controls the human body’s capacity to store fat, particularly after long periods of “famine” or weight loss – a process that underlies yo-yo dieting, where we regain the weight lost caused by dieting.

Being able to control this switch may be a therapy for obesity and other metabolic disorders such as Type 2 diabetes.

Associate Professor Zane Andrews and his colleagues at the Monash Biomedicine Discovery Institute have identified a protein in mice, called carnitine acetyltransferase (Crat), in hunger-processing brain cells that regulate fat storage after dieting. These findings were published today in the international journal Cell Reports.

When we are dieting (or evolutionarily when there is a famine) our bodies burn more fat to provide enough energy. But at the same time our brains fight to conserve energy and, as soon as food becomes available, the body switches from burning to storing fat and instead uses ingested calories from food.

The international research team discovered the Crat protein and developed a mouse that had this protein genetically switched off. These mice, when fasted or fed after a fast, consume their fat reserves at a greater than normal rate.

According to Associate Professor Andrews, repeated dieting, or yo-yo dieting, may lead to weight gain because the brain interprets these diets as short famines and urges the person to store more fat for future shortages. For the first time the Crat protein in hunger-processing brain cells has been identified as the switch that instructs the body to replace the lost weight through increased fat storage.

“Manipulating this protein offers the opportunity to trick the brain and not replace the lost weight through increased appetite and storage of fat,” Associate Professor Andrews said.

“By regulating this protein we can ensure that diet-induced weight loss stays off rather than sneaking back on."