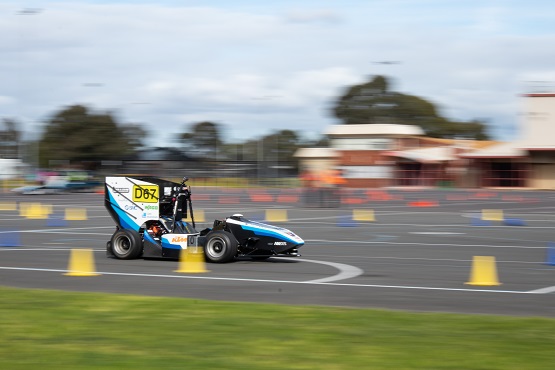 From developing complex computer-vision algorithms, to designing robust actuation hardware, the driverless race car, the M19-D, is the result of a collaboration between some of the brightest minds across Monash University’s diverse faculties.

Monash Motorsport’s Chief Executive Officer, Paras Bhutiani, said the M19-D was more than three years’ in the making, and is competition-ready for the Formula Student driverless competition in Germany in 2020.

“We first began development on the M19-D way back in 2016, with over 200 undergraduate students from Monash working tirelessly to bring it to fruition. The talented team at Monash designed and built its innovative and high-performance features to create the state-of-the-art driverless vehicle, which we’re excited to compete with in the upcoming Formula Student driverless competition in Germany next year,” he said.

The M19-D’s key features include:

Monash Motorsport’s Driverless Chief Engineer, Aryaman Pandav, said it’s been an exciting and rewarding experience leading the build of the M19-D, which has provided him with the skills to be job-ready when he finishes his double degree in mechatronics engineering and science at the end of 2020.

“I’ve been part of the Monash Motorsport team since 2017. Since joining, I’ve not only gained hands-on engineering experience, but also the strong leadership skills required to excel in my career and lead a team effectively,” he said.

“I’ve also created strong industry connections through networking with Monash alumni, partners and sponsors that will best prepare me for today’s workforce. Without being part of the Monash Motorsport team, this wouldn’t have been possible.”

Monash Motorsport will host the first public demonstration of the new M19-D as part of the University’s Autonomous Showcase on Open Day at Clayton campus, where current and prospective students and staff, driverless car enthusiasts and the wider community can watch the driverless race car in action.

Held on Sunday, 4 August, outside Building 72, 14 Alliance Lane, the M19-D will take to a racetrack completely autonomously, offering insight into the future of autonomy in Australia. Multiple demonstrations will run throughout Open Day.

The Faculty of Engineering’s Director of Student Teams, Dr Scott Wordley, said: “The students have done an outstanding job building the M19-D – the first student-made, fully autonomous race car in Australia. This is a true testament to their tenacity and commitment, and I’m looking forward to seeing their hard work come to life on Open Day.”

The Dean of Engineering, Professor Elizabeth Croft, said Monash Motorsport was a leading example of the type of internationally competitive, multidisciplinary and entrepreneurial student teams Monash University has to offer.

“Monash Motorsport students are highly capable designers and competitors, with almost two decades of experience in vehicle design innovation within a successful student-led enterprise,” she said. “Student teams like Monash Motorsport offer outstanding opportunities for our students to develop technical, employability and entrepreneurial skills on a truly international scale,” she said.

“In debuting Australia’s first student-built autonomous race car, our students have also proven their capability to lead innovation in advanced technologies such as artificial intelligence, computer vision and machine learning, well before they've even graduated,” she continued. "We're incredibly proud of their efforts, and congratulate Monash Motorsport on this outstanding achievement."

Monash Motorsport is a student-run team comprising more than 130 active members who design, build, test and race Formula SAE cars in Australia and across the globe. Competing since 2000, Monash ranks second in the world in the internal combustion category, and broke ground recently by ranking seventh in the world with its first electric vehicle. To view the rankings in each class, please visit mazur-events.de/fs-world.

For more information about the Faculty of Engineering, please visit monash.edu/engineering.