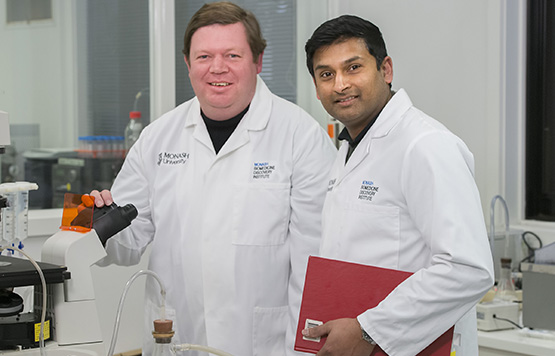 A study led by scientists at Monash University has shown that a new therapy developed through stem cell technology holds promise as a treatment for chronic asthma.

Lead researchers Associate Professor Chrishan Samuel and Dr Simon Royce tested the efficacy of the MSCs on three key components of asthma in a preclinical model of chronic allergic airways disease: inflammation; airway remodeling (structural changes that occur in lungs as a result of prolonged inflammation); and airway hyperresponsiveness (the clinical symptom of asthma).

The study, published in the FASEB Journal, found that the MSCs could effectively reduce inflammation, reversed signs of airway remodelling and completely normalised airway/lung fibrosis and airway hyperresponsiveness, particularly when delivered intranasally.

It concluded that they may provide a novel stand-alone therapy or an adjunct therapy for groups of asthma sufferers who do not respond to current (corticosteroid) therapy.

“Most importantly, what we found was you can treat fibrosis (hardening or scarring of the lung) very effectively,” said Associate Professor Samuel, who heads the Monash BDI’s Fibrosis Laboratory.

“When we’ve tested other types of stem cells they haven’t been able to fully reverse scarring and lung dysfunction associated with asthma – we’ve had to combine them with anti-scarring drugs to achieve that. These cells were remarkable on their own as they were able to effectively reverse the scarring that contributes to lung dysfunction and difficulty in breathing,” he said.

One in nine - or around 2.5 million- Australians have asthma.

Further research will be conducted to test the MSCs in combination with, or compared to a clinically-used corticosteroid. Clinical trials using the cells as a novel target for asthma are then envisaged.

Committed to making the discoveries that will relieve the future burden of disease, the newly established Monash Biomedicine Discovery Institute at Monash University brings together more than 120 internationally-renowned research teams. Our researchers are supported by world-class technology and infrastructure, and partner with industry, clinicians and researchers internationally to enhance lives through discovery