Ultra-low energy devices at the flick of a switch 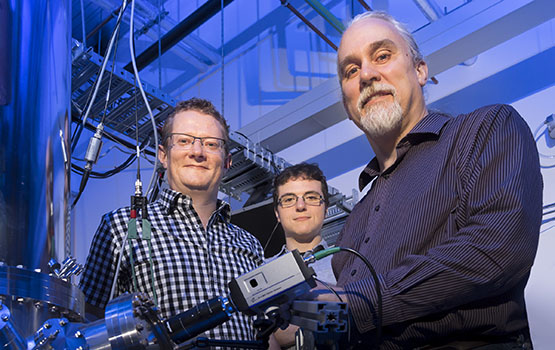 Dr Mark Edmonds, James Collins and Professor Michael Fuhrer have for the first time successfully 'switched' a topological insulator off and on via an electrical field.

Researchers at Monash University are one step closer to providing a global solution to minimising the energy wasted by modern telecommunications and computing – simply by the flick of a switch.

Professor Michael Fuhrer, Dr Mark Edmonds and James Collins from the School of Physics and Astronomy at Monash University have for the first time successfully ‘switched’ a topological insulator off and on via application of an electrical field.

This announcement, published today in one of the world’s leading science journals Nature, is a major advancement towards the creation of a functioning topological transistor. Topological transistors would burn much less energy than conventional electronics.

“Ultra-low energy electronics, such as topological transistors, would allow computing to continue to grow without being limited by available energy. This becomes extremely important as we near the end of achievable improvements in traditional, silicon-based electronics,” Professor Fuhrer said.

“Information and communications technology already consumes 8% of global electricity; a figure that is doubling every decade. To solve this problem, we need to develop a new type of transistor that burns less energy when it switches.

“This discovery makes an important contribution in the direction of topological transistors that could transform the world of computation.”

A significant proportion of the growing amount of energy used in information and communications technology – such as mobile phones, computers and the data centres that connect them – is caused by transistor ‘switching’. Each time a transistor switches, a tiny amount of energy is burnt.

“And with billions of transistors in each electronic device, switching billions of times each second, the amount of wasted energy adds up,” said study co-author James Collins, a Monash University PhD student.

In order to be viable to the current silicon-based technology, topological transistors must operate at room temperature, without the need for expensive supercooling, and must ‘switch’ between conducting and non-conducting at a rapid rate through an electric pulse.

“While switchable topological insulators have been proposed in theory, this is the first time that experiment has proved that a material can switch at room temperature, which is crucial for any viable replacement technology,” Dr Edmonds said.

The research was conducted through FLEET (The Australian Research Council Centre of Excellence in Future Low-Energy Electronics Technology) – a collaboration of more than 100 researchers at seven Australian universities and 13 Australian and international science organisations.

Bringing together the world’s leading minds in engineering and physics, FLEET is driving innovation in topological materials and atomically-thin, ‘two-dimensional’ (2D) materials to create ultra-low energy electronics that achieve zero, or near-zero, wasted dissipation of energy.