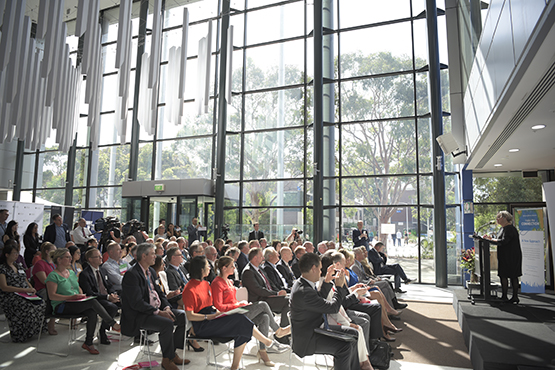 The office will serve as Johnson & Johnson Innovation’s local base to identify and nurture state-wide pharmaceutical and med-tech projects that can be partnered towards commercialisation.

JJIPO@MONASH will facilitate access by Victorian researchers and companies to the global expertise in scientist research, investment, and commercialisation of the Johnson & Johnson Family of Companies across pharmaceuticals, medical devices and consumer.

Minister Hennessy said the new office is a great example of how Victoria’s leading research institutes and universities are partnering with major global players to drive growth in the medtech and pharma sector. “We’re proud to have so many leading researchers here in Victoria. The new Johnson & Johnson Innovation Partnering Office at Monash will give our world-class researchers the support they need to transform their findings into everyday care for Victorians while also supporting local jobs.”

Monash President and Vice-Chancellor Professor Margaret Gardner AO said the office demonstrated the University’s commitment to supporting new partnerships in biomedical innovation. “Monash University has established a world class reputation for helping to solve some of the most pressing challenges of our time. The new Johnson & Johnson Innovation Partnering Office, which expands on our existing partnership with the Johnson & Johnson Family of Companies, greatly advances Victoria’s expertise in biomedical research, fostering new partnerships and innovation to create real and lasting impact worldwide,” Professor Gardner said.

Australia ranks 5th in the world for life science innovation (*) and Victoria is home to over 40% of Australia’s ASX listed health science companies. According to Sarah Newton, Pro Vice-Chancellor of Monash University (Enterprise), positioning the JJIPO@MONASH makes sense “Victoria has the talent and infrastructure to develop and commercialise its world class medtech and pharma research,” she said.

Johnson & Johnson Innovation, focused on generating healthcare solutions through value-creating partnerships, already has research collaborations with Monash University, the Walter & Eliza Hall Institute, the University of Melbourne, RMIT and St Vincent’s Institute, but the JJIPO@MONASH will act as a hub to “coordinate and upskill the Victorian life science community and to develop programs which will facilitate greater connectivity at both a state and global level,” Ms Newton said.

The Victorian Government has identified medical technologies and pharmaceuticals as one of eight priority sectors with strong potential for significant growth. The sector already employs 23,000 people in industry across the state, generating $12.7 billion in revenue.