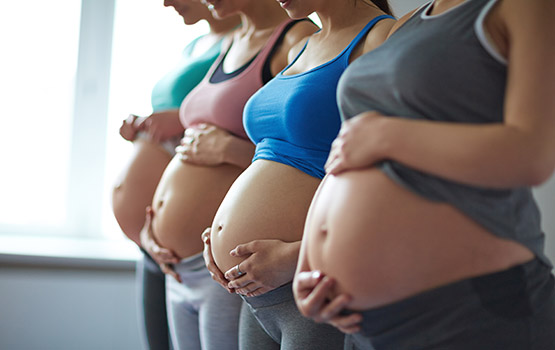 The world’s largest and most comprehensive international study of more than 1.3 million pregnant women, by researchers at the Monash University in Melbourne, Australia found that three out of every four pregnant women worldwide, and their healthcare teams, are failing to achieve a healthy weight gain during pregnancy, leading to preventable adverse health consequences for women and their babies.

Published in the Journal of the American Medical Association (JAMA), the study highlights the disturbing high rate of excess weight in mothers at the start of pregnancy and shows that the vast majority of women are not achieving healthy weight gain in pregnancy.

In addition, researchers found mothers are often gaining too much weight during pregnancy, increasing health risks during pregnancy and beyond, leading to their children more likely to be overweight or obese.

The research team was led by Monash University Faculty of Medicine, Nursing and Health Sciences’ Professor Helena Teede and Dr Rebecca Goldstein. They reviewed more than 5300 studies and in a large scale international collaboration, re-analysed and integrated pregnancy data from groups across Europe, Asia and the United States.

The study sought to affirm the relevance of older US guidelines for healthy weight gain in pregnancy. These 1990 Institute of Medicine Guidelines were originally based on 1980 data of a largely Caucasian population. Updated in 2009, these guidelines, “were still based on women with a lower general weight than our current population of mothers with limited ethnic diversity,” Dr Goldstein said. While these guidelines are endorsed by the American College of Obstetricians and Gynaecololgists, “they are not universally implemented,” with considerable lost prevention opportunities, according to the JAMA paper authors.

The Monash-led international study looked at a very broad range of ethnically diverse pregnant women, and explored their weight gain during pregnancy, their health and the health of their babies.

Key findings showed that at the time of pregnancy:

During pregnancy, a striking three in four women did not gain healthy recommended weight in pregnancy, with increased risks for mothers and babies including:

Importantly, the study found that entering pregnancy underweight and failing to put on recommended weight during pregnancy led to:

Professor Teede said the current study “represents the largest contemporary international snapshot of women’s weight coming into pregnancy and their weight gain during pregnancy, how this is impacting their and their baby’s health and the healthcare system.”

Importantly, the study takes into account “our more contemporary population of mothers who are increasingly entering pregnancy at an unhealthy weight, and it covers the diversity of race across Europe, US and Asia,” Professor Teede said.

“This latest study means - more than ever - that weight needs to be monitored in pregnancy and women provided with support to improve lifestyle. Health professionals need to be encouraged and trained in having “healthy conversations" introducing relatively simple effective lifestyle interventions to support women before, during, and after pregnancy. For health services and policy makers, recognition is needed that effective, simple health lifestyle interventions are available and now need to be incorporated into routine care to optimise reach and availability for all women.

“We know what to do and now need to implement the available evidence into action to help women and the next generation be healthier," Professor Teede said.