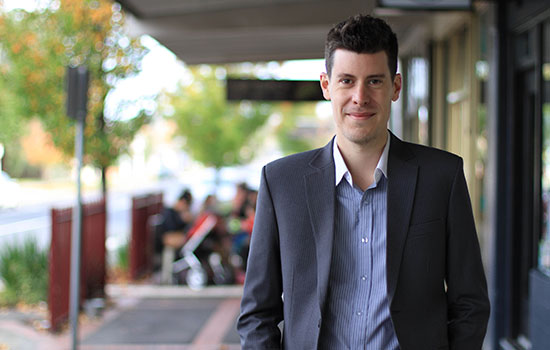 Sean completed a joint PhD in the School of Law at the University of Warwick and the Centre for Theatre and Performance at Monash University, where he also held appointment as a teaching associate in Performance Studies. His doctoral research examined the performance of law through a study of courts from the perspective of contemporary theatre and performance research and practice.

With a keen interest in exploring UK connections, the Monash Warwick Alliance Joint PhD was the perfect platform for Sean to be able to take his studies further. Sean successfully applied for the Joint Phd and his research into the performance of law exploring all aspects of performance during court trials, including how dress impacts a trial, how space is created, the role of the audience, and the use of visual screens, began.

At the time, Sean noted “We’re yet to really investigate what role performance plays in court. It’s an emerging field, and only a handful of scholars are currently looking at the connection between law and performance.”

Sean’s decision to embark on a Joint PhD through the Monash Warwick Alliance was also cemented by the fact he’d be able to undertake his work in two countries.

“The opportunity to work in two universities, in two different continents, in two different faculties, is unlike any other program. Beyond the career opportunities it offers in terms of building linkages in two countries, I think the perspectives it gives are crucial to my research, particularly to see differences in court proceedings between Australia and the UK.”

Sean also spent time on exchange in the School of Law at the University of Warwick towards the end of his undergraduate course in 2013. It was there he met Gary Watt, his PhD law supervisor.

“I was really excited by Gary’s research. It met a lot of my interests, and I knew at that moment I wanted to do the Monash Warwick Alliance Joint PhD. I also had a fantastic supervisor, Felix Nobis, at Monash”

After completing his Joint PhD, his future plans at that time involved continuing the interdisciplinary nature of his work and hopefully being able to take this into policy development. He hoped his research would have potential spin-offs in helping to educate legal practitioners, judges and others involved in the legal field.

He has also worked as a freelance actor, director and theatre producer. He has performed in the Midsumma, Melbourne Fringe and Adelaide Fringe Festivals, and at the Malthouse Theatre, Arts Centre Melbourne and La Mama Theatre.

Sean currently works as a research officer at La Trobe University in the Australian Research Centre for Sex, Health and Society. He started working there through a connection made during his Monash-Warwick Alliance joint PhD. Sean visited Warwick between 17 - 28 July this year, after securing a Visiting Fellowship as part of a new project he is working on – a "post-human rights" approach to drug policy. With new Australian drug laws in some jurisdictions now required to comply with human rights frameworks, this four-year research project is being undertaken to examine whether and how these human rights frameworks might advance or hinder drug law reform. Sean started on the project as a research officer at the beginning of 2021 in his first post-doctoral role.

To some extent, Sean’s Alliance Joint PhD studies influenced applying for his current role, given his background was so novel, i.e. looking at law through a theatre lens. His current role looks at applying a different critical lens with respect to issues surrounding drugs and human rights and it has provided him with the opportunity to expand on his knowledge and take this research further, including examining the ways in which rights negotiations surrounding drug legislation are performed.

Whilst at Warwick, Sean has been using his time to write up a paper from the project that he presented at the Global Meeting on Law and Society in Lisbon, to submit for publication. He also conducted interviews with human rights experts around how they view human rights and how this impacts people who use drugs. Sean took the opportunity to also catch up with Gary Watt, his former Warwick doctoral supervisor, and John McEldowney, a colleague from the law school who is the former head of the parliamentary studies group. Given the interest in how parliament applies human rights to drug related legislation, it was an invaluable meeting.

In addition, Sean connected with colleagues working in the dance and law space, a novel space in legal research, and discussed potential opportunities for collaboration into the future. Sean comments, “There is a great synergy between a lot of the work that’s happening in Australia in looking at law through a performance lens and also in the UK, despite the distance”

At the end of his term at La Trobe University, Sean hopes to continue his passion for research into theatre and law and embark upon research projects that probe and explore this intersection from a different angle. One example is looking at LGBTQIA+ human rights claims and how useful human rights is as a framework for guiding LGBTQIA+ law reform; in particular, how community advocates perform rights claims before parliamentary hearings, i.e. marriage equality.

Sean highly recommends working with the Alliance. The ICUR conference was just the springboard to pursuing his research aspirations. The Alliance helped him establish valuable connections with his supervisors and colleagues, and he highly recommends it for current students to study abroad.

“One of the things I’ve really learnt from all of this is that international collaboration is really valued, for personal growth, connecting and developing networks. I can now draw from my experience for future work”