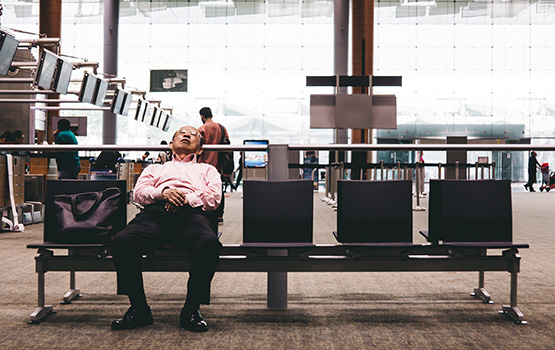 New research by neuroscientists at Monash University shows that the sleeping brain has the capacity to encode important pieces of information - even though the body is resting.

Imagine slowly drifting off to sleep in a bus or an airport after a hard day’s work. As the body enters a restful state and consciousness dissolves, we might still want to pay attention to key information in these typically noisy settings – like when our bus stop is announced, boarding message is called or name is mentioned.

In good news for habitual dozers, the latest research by neuroscientists at Monash University and in France shows that the sleeping brain is sensitive to the meaning of a sound and has the capacity to encode important pieces of information – even though the body is resting.

“When we sleep, we lose our ability to physically interact with our environment but that does not mean the brain is shutting down from what happens in the outside,” Dr Thomas Andrillon, Research Fellow at the Monash Institute of Cognitive and Clinical Neurosciences, said.

“While previous studies have suggested that awakening can be attributed to sounds or semantic relevance (like the mention of someone’s name), this is the first study to show how the sleeping brain covertly selects which piece of information to prioritise when multiple stimuli compete with each other.

“In an ever-changing environment, the ability to process relevant signals during light sleep offers substantial benefits, especially when considering that light sleep represents about half the total sleep time in humans.”

As part of the study, published today (Tuesday 15 January 2019) in Nature Human Behaviour, 24 participants were presented with two competing audio stories as part of a controlled one-hour nap.

Participants had a reduced sleep time the previous night and were barred from consuming any stimulant that day to facilitate their nap.

In one ear, participants heard up to 80 news grabs and movie excerpts on loop while asleep. In the other ear, they received speech that was devoid of any meaning, like the Jabberwocky poem from Alice’s Adventures in Wonderland. The aim was to see whether sounds carrying meaning would be preferentially processed by sleepers.

To do so, researchers used a technique called stimulus reconstruction in which participants’ brain activity is used to reconstruct what they are hearing and detect the focus of their attention.

In both wakefulness and sleep, researchers observed that participants were focusing preferentially on the meaningful stimulus compared to the meaningless one. This means that, even during sleep, our brains remain sensitive to meaning and can extract what is most relevant out of a noisy, crowded acoustic environment.

“By playing stories simultaneously to healthy participants during daytime naps, we showed that sleepers have the tendency to prioritise stories that make sense over stories without meaning,” Dr Andrillon said.

“This means that, even when we sleep, we can segregate meaningful and meaningless sources of information and prioritise the meaningful stimuli. This work further shows the extent to which our brains can remain active during sleep.”

The study titled ‘Sleepers track informative speech in a multi-talker environment’ was a collaboration between Dr Andrillon and research colleagues Guillaume Legendre, Matthieu Koroma and Sid Kouider from Paris, France.