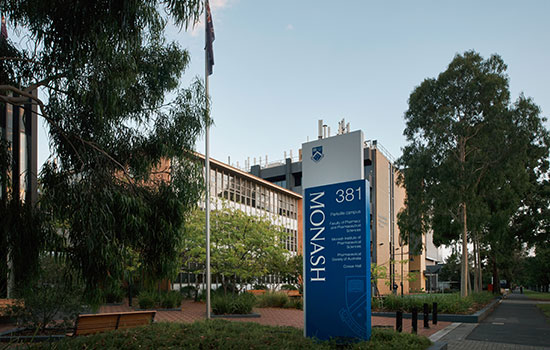 Discover why Monash University is ranked second best in the world to study Pharmacy and Pharmacology, and number one in Australia, at our Monash Parkville campus Open Day on Sunday 20 August.

Monash’s Faculty of Pharmacy and Pharmaceutical Sciences throws open its doors from 10:00am to 3:00pm giving visitors a view of pharmacy in action through interactive tours, virtual reality displays, and a Kids’ Lab to inspire the next generation of young scientists.

This year’s theme, ‘Become a Medicines Superhero’, highlights the role of graduates in improving human health and wellbeing as practising pharmacists, or as researchers involved in developing new treatments.

Two notable examples of treatments developed at Monash Pharmacy include the Relenza flu vaccine and a new, inhaled form of a medicine, Oxytocin, which could significantly reduce maternal deaths around the world.

Ranked number two in the world for Pharmacy and Pharmacology, according to the QS World University Rankings by Subject, the Faculty is also a major contributor to the sector through its research and industry partnerships.

As one of Victoria’s fastest growing sectors, the industry employs more than 23,000 people in Victoria and generates over $12.7 billion in revenue a year in medical technologies and pharmaceuticals.

While Open Day is aimed at prospective students, everyone is welcome to tour the campus facilities, and talk with staff and current students about career options, overseas study and scholarships.

Prospective students are encouraged to plan ahead to make the most of their visit by visiting the Open Day website.

Monash University is the largest university in Australia and ranked in the top one per cent of world universities. It has earned an enviable national and international reputation for research and teaching excellence, and is a member of Australia’s Group of Eight research-intensive universities and the M8 Alliance of Academic Health Centres and Medical Universities.