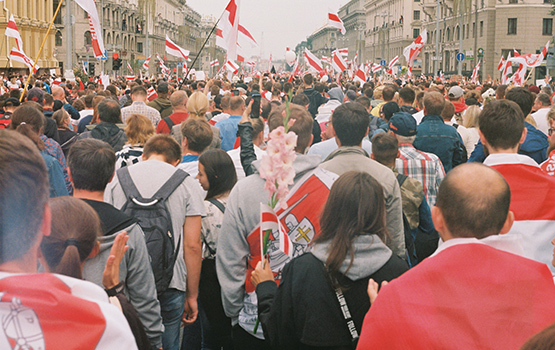 Monash researchers have found evidence that supports reporting of government-sanctioned internet censorship during the 2020 Presidential Election in Belarus.

With hundreds of people detained as widespread protests against Belarusian leader Alexander Lukashenko continue to grip Minsk, Monash University researchers have found evidence that supports reporting of government-sanctioned internet censorship during the 2020 election.

An analysis of billions of internet measurements by researchers at the Monash University IP Observatory found, beginning on election day (9 August) and continuing for at least three days afterwards, highly irregular internet service in the nation’s capital, Minsk.

The government of Belarus referred to these events as a ‘massive cyber-attack’.

However, data shows internet signals entering and leaving Minsk reduced by about 100ms on average – about 50 per cent slower than usual. Additionally, across 10-11 August, a number of internet addresses went offline, while the following day, a large block of Minsk-based IP addresses appeared online for two hours and then disappeared.

Dr Klaus Ackermann, Lecturer in Econometrics and Business Statistics; Simon Angus and Paul Raschky, Associate Professors in Economics, conducted the research. The Monash University IP Observatory is a project of the SoDa Laboratories at the Monash Business School.

For more than 18 weeks, Belarusians have taken to the streets to protest against the leadership of President Lukashenko who was re-elected in August during a contest they say was fraudulent.

Thousands of protestors have been arrested since the demonstrations began, with political opponents, such as opposition leader Svetlana Tikhanovskaya, forced into exile.

“Incidents of internet disruption and website censorship have also continued, including reported interruptions to mobile internet before and during planned protests,” Dr Ackermann said.

Using a commercially available geo-located IP database combined with the Monash team’s own powerful internet scanning technology, researchers were able to measure the online or offline status of millions of internet addresses across Belarus every hour between June and August 2020.

They were able to measure the connectivity and latency – the immediacy of the connection – before, during and immediately following the Belarusian election.

Associate Professor Angus said reports of internet tampering began in the middle of June, with sizable tremors in internet traffic detected in the Observatory’s analysis across Belarus one month later. He said this suggested a “government-testing phase” prior to the “main event” in August.

“The first and most obvious feature is the huge spike in latency beginning at around 9am on 9 August, which extends into the afternoon, concluding at around 6pm,” Associate Professor Angus said.

“The timing is particularly interesting. As opposed to the pattern of evening ‘slow-down’ events across July, and subsequently when riots took hold of the streets in Minsk, this one on election day was not an evening event, but rather coincided more strongly with the voting window during the day.”

Associate Professor Raschky said their analysis showed no such problems with internet connectivity or latency in neighbouring countries, such as Lithuania, during this period.

“According to Human Rights Watch, this blocking appeared to be an attempt by the government to demobilise protests and silence information about police brutality against protesters,” Associate Professor Raschky said.

“While the restrictions of some online channels may have eased, the volatile political climate combined with ongoing public demonstrations against the leadership by no means implies that the end-user has a free internet experience.”

The mission of the Monash University IP Observatory – ‘internet insights for social good’ – is to monitor the availability and quality of internet during critical events, such as elections, natural disasters or conflicts. The observatory is a project of SoDa Laboratories at the Monash Business School.

For more information about this research, please visit https://medium.com/insights-monash-university-ip-observatory/belarus-internet-shutdowns-in-2020-a-data-driven-dissection-d5d4d659b161.