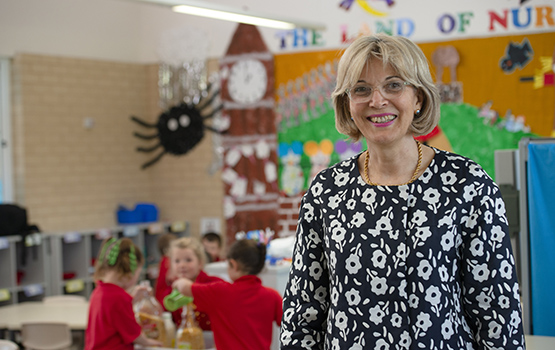 New research by Professor Marilyn Fleer shows girls are denied the opportunity to participate in STEM activities despite showing significant interest in design and construction.

Girls as young as four can overcome educational disadvantage and feel empowered to participate in STEM activities in Australian classrooms, through an emphasis on play-based learning.

The latest study by Monash University shows girls’ thoughts and actions are endorsed when engaged in STEM play and exploration in the classroom. However, opportunities presented to girls are rare as boys occupy design and construction spaces.

Research by Professor Marilyn Fleer, Foundation Chair in Early Childhood Education and Development at Monash University, shows even when teachers design spaces for STEM activity, such as an engineering setting where craft, blocks and the home corner are combined, girls appear to be as interested in being in the new space as boys.

But, when girls have access, boys have been shown to persuasively ask girls to give up building materials or equipment, or they take those construction products out of their hands.

In order to #CHANGEIT, Professor Fleer has created an Australian-first initiative called the Conceptual PlayLab to investigate how play-based education can deliver essential cognitive and learning outcomes for infants, toddlers and pre-schoolers, especially young girls, in STEM.

As part of the $3.2 million Australian Research Council (ARC) funded project, Professor Fleer will test a new model of teaching called Conceptual PlayWorld through a purpose-built app which supports teachers and parents to create a play-based world that helps children form ideas and use their imagination to solve problems.

Results from the five-year study will form the basis of a national teaching framework that can help early childhood educators confidently teach STEM through play.

“In unprecedented times, the global community is calling for greater knowledge and engagement in STEM to support the decision-making and practices of the general community. COVID-19 has highlighted this pressing need,” Professor Fleer said.

“In contrast, most governments around the world have reported that there is a declining number of graduates in STEM-related fields, and a growing disengagement in STEM within schools, particularly for girls and children from culturally diverse backgrounds.”

The preliminary study results centred on the investigation of four-to-six year old girls’ activities in STEM, with a view to determining if and how a Conceptual PlayWorld could positively contribute to their interest and activity in science, technology, engineering and mathematics subjects.

As part of the study, teachers and researchers designed an educational experiment to support girls’ participation in learning of STEM. The focus of the program was a Conceptual PlayWorld using the story of Robin Hood, which required engineering principles and scientific concepts to solve social problems.

Professor Fleer said the results suggested that a Conceptual PlayWorld could create conditions in play-based settings that made a difference to girls’ engagement and learning in STEM.

“In our educational experiment we implemented a Conceptual PlayWorld over 12 weeks, with a specific focus on role-playing and acting ‘as if’ engineers and scientists researching problems, being in engineering teams, and designing and prototyping solutions,” Professor Fleer said.

“The outcomes show how Conceptual PlayWorld gives girls access to resources, positions them as leaders of engineering teams, values their contributions in scientific discussions, and shows consistent use by girls of technical language, design visualisation, and critical and problem solving thinking associated with engineering.

When teachers were with the children in the imaginary play, they regularly invited girls to take leading roles, and were named as scientists or engineers.

“We found that within the new distributed activity setting, the new practices of engineering and scientific thinking meant that the children changed their roles from students to engineers/scientists, when not in role as characters in the story,” Professor Fleer said.

“This supports a perception that STEM is very much for girls, and that they have and can take a leading role in STEM explorations during play. This suggests that a girl’s identity in STEM is being developed at the beginning of their early explorations of these fields of inquiry and practice.”

Ongoing studies with teachers, parents, students and schools across Australia will be conducted with the support of PhD candidate Tanya Stephenson.