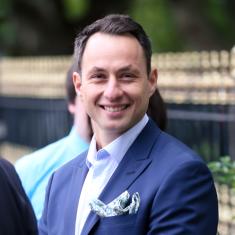 Dr Nicholas Nicoloudis has always been a passionate software developer.

He began his career working for a small software provider, before deciding to do his PhD at Monash University.

“Completing my PhD at Monash opened many opportunities for me. My scholarship was funded by a global software provider that allowed me to travel and work in a global software organisation while I was studying,” he said.

Dr Nicoloudis continued developing software while working on his PhD. His greatest achievement at that time was a scalable omni-channel product that became his company’s best seller. The program was implemented by a number of multinational corporations and as a result, Dr Nicoloudis was offered a partnership in the business he was working for.

During that period, Dr Nicoloudis also became interested in developing mobile applications. This led to several of his papers on the subject being published.

Dr Nicoloudis became the lecturer for one of the first mobile application development subjects at Monash, worked on projects for Victoria Police and later joined a software startup company. He also started the Mobile Special Interest Group for the Australian Computer Society and convened the group for over 6 years.

Dr Nicoloudis now works as a Global Solution Architect specialising in mobile and user experience solutions for SAP. He continues to give guest lectures at universities and conferences. In his free time, Dr Nicoloudis is a loving father of 3 and enjoys drawing, painting and keeping fit.

Where has Monash IT taken you? Why not let us know what you’ve been up to, and share your career milestones and professional insights – we’d love to know more. Contact the Alumni Relations Team. (Profiles may be featured here on our website, in our faculty Alumni eNews, or via our social media channels.)