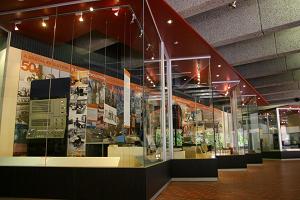 Located in the Foyer, Building B, Caulfield campus, Monash University.

The exhibition is in four parts:

This major part of the exhibition displays the development of computers during the second half of the twentieth century combined with photographic images of changes in society at the same time. The visitor will see the rise of the personal computer with the local Microbee, early games consoles and the home computer starting with the early Apple computers. The display highlights the speed at which computers have developed from a room full of lights to an essential part of daily life.

The 1970s: In the centre of the photo is an iconic image of the rebellious 1970s from the Melbourne The Age newspaper photo library. Images of each decade are set against contemporary computer devices.

People and computers at Monash 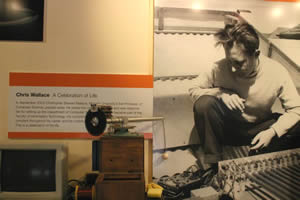 Staff and students have been working on computers at Monash University since the early 1960s. The museum has a changing display featuring the lives and works of notable people during that time.

Presently the display highlights the achievements of: (1) Professor Cliff Bellamy FACS - our first Dean and first Computer Centre director, in many ways he lead the introduction of computers into Victoria; (2) Professor Chris Wallace FACM - our first Professor of computer science, inventor of the Minimum Message Length (MML) technique and (3) Professors David Abramson and John Rosenberg - while students of Computer Science at Monash, they developed new computers under the Monads project both went on to distinguished careers in computing research and education.

The people and computers featured in our exhibition are updated at intervals with new material and biographical displays. The recent past display(s) include:

We gratefully acknowledge the support of our sponsors and partners without whom our museum exhibition would not be possible: