The beginnings of computing at Monash University

Monash University received its official charter in 1958 and started building a campus at Clayton. An Interim Council was appointed to oversee all the developments ranging from academic directions, campus construction and administrative needs. One of their first directives was to select a suitable computer  to  install  at the Clayton campus. A committee was appointed under Professor Westfold, Chairman of Mathematics to determine which of the current models of computer would be the most appropriate. The computer was to be placed in a new Computer Centre which was separate from any particular faculty but operated closely with the Department of Mathematics, Faculty of Science. The Centre had both administrative and academic activities. The University developed a separate computing department for teaching computer science in 1967 however the Computer Centre continued to be the site for major computer installations.

In 1961 the University ordered a Ferranti Sirius computer from Ferranti Ltd through their Melbourne office for about 30,000 pounds. Ferranti placed their own Sirius computer on campus until the University’s machine was delivered and ready for operation by late November 1962. Cliff Bellamy, then employed by Ferranti Ltd, helped to set up the Ferranti computers at the new Computer Centre. Cliff Bellamy transferred from Ferranti to Monash University in early 1963. It was the start of Bellamy’s career at Monash which spanned more than thirty years of supervising and developing computer facilities at Monash University.

The Ferranti Sirius was a small computer with 4000 words of storage using paper tape for input and output. It was used to process administrative and accounting needs for the University but was also used for academic teaching. It soon proved to be too small for the University’s needs and by 1964 the Centre had installed a CDC 3200. The Centre continued to increase the range of computers with the acquisition of a Burroughs B-5500 in 1969. In 1973 Bellamy negotiated to have a Burroughs B-6700 installed at Monash Clayton.

The University also developed an academic school for teaching computer science during the 1960s. Professor Chris Wallace was appointed as Chair of Information Science in December 1967. Until this time, the Computer Centre had been used for teaching computing. The first class was Information Science 303 for third year students. Seven honours students were enrolled in 1970. This was the beginning of a computer science research program. During 1972 the Department purchased its own HP2100A computer. In 1975 the Department’s name was changed to Computer Science. This department grew to have a complete subject range through all levels of students and establish a world-recognised research program.

In 1990 Monash University Clayton campus was amalgamated with several other institutions including Chisholm Institute. Chisholm Institute had developed its own computing school during the 1960s. Initially staff used off-campus facilities but they needed their own machine. Caulfield Technical College leased and then purchased a 1000 word Ferranti Sirius during 1963/1964 for EDP classes. The Caulfield Technical College changed to the Caulfield Institute of Technology in 1968. This name was then changed to Chisholm Institute of Technology in 1982 after a merger with the State College of Victoria at  Frankston. The Ferranti Sirius and the EDP Department were located in the Junior School, Caulfield. (This building is now designated Building T) In 1969 the Computer Centre was separated from the EDP Department. The new Computer Centre purchased an ICL 1903A and was located on Level 5 in the F Block.

The Monash University Faculty of Information Technology was established in 1990. It was the first faculty dedicated to information technology in Australia and combined the different computing departments from the amalgamated institutions including Clayton, Caulfield, Berwick and Peninsula.

Computer studies had grown from a small part of the Clayton Computer Centre’s program and night classes at Caulfield Technical College to a series of departments with undergraduate and research programs across the multi-campus base within a recognised separate faculty.

Research projects currently being investigated by the Museum:

Provenance of the Ferranti Sirius computer in the Museum collection

This computer was acquired by Monash University in 1962 and was manufactured by Ferranti Ltd., England. Current research continues to research the background to the purchase of this computer, the subsequent donation of a second Ferranti Sirius in 1967 from ICIANZ and the decommissioning of  these  computers  in 1972.

Background of the MONECS education program in the 1970s

This educational program was an outreach educational initiative by the Computer Centre, Monash University to introduce computer technology to secondary school students and other institutions. Research is investigating the beginnings of this program, associated staff and the impact on the teachers and students in secondary schools.

Background of the MONADS PC Monash Univerity in the 1980s

This computer design and development project was undertaken in the Department of Computer Science, Clayton campus in the mid 1980s by Professor L. Keedy, Professor J. Rosenberg and Professor D Abramson. The MMoCH produced a paper on this project in 2013.

The Virtual Museum project aims to explore ways of engaging students (from primary to tertiary) and members of the wider public in the brief but vital history of computing and information processing. This project will extend the function of MMoCH as an educational resource. The project will enable the  MMoCH artefacts  and material to be accessed via existing 'virtual' applications, effectively creating a virtual museum of computing. The existing artefacts will be represented in a way that expresses the current state of technology and technological knowledge, engaging the interest and the  intelligence of the contemporary museum 'visitor'.

Role of computers at Monash University

The Museum is collecting reference material and personal recollections on the role of computers at Monash University. This includes some oral history. 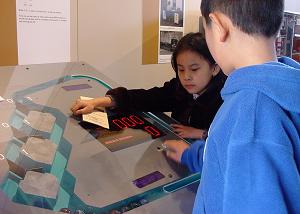 The photograph shows two children learning about binary counting with a mechanical binary counter counting balls. It is attached to an electronic binary counter showing both one digit of decimal and three bits of binary equivalent.

If you have any contribution to make to these topics, please contact the Museum. 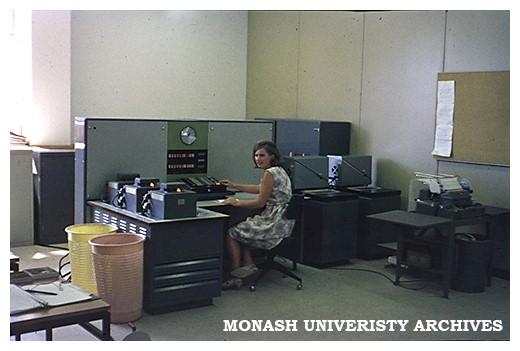