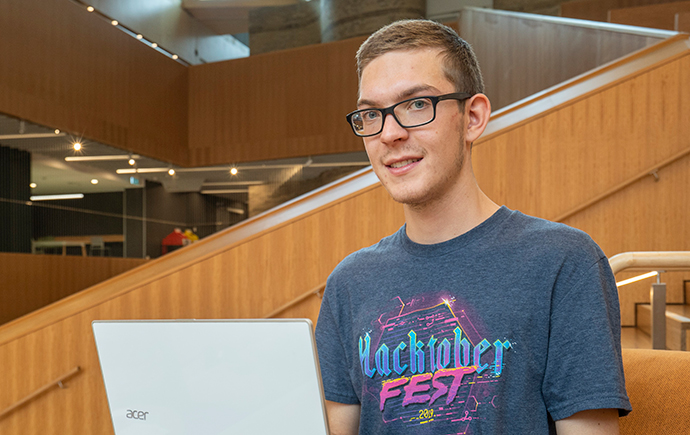 Ever since I was three, I’ve been curious about computers. However, my passion really blossomed in Year 10 when we were given a personal, open-ended project to do. I decided to explore cryptography and write my own program to do calculations that encrypt/decrypt messages.

I believe that IT strikes an awesome balance between theory and practice.

Theory really helps you take ‘mental shortcuts’ by increasing your in-depth understanding, and practice is literally a couple keystrokes away. This feedback loop is very satisfying.

Choosing a supportive and hands-on university

Monash was an easy decision. Sure, it’s one of the top universities in the world and one of the best in Australia. But what personally sealed the deal for me was its location (unusual, I know) and generous scholarships for those from low-income backgrounds.

Though most challenging, my favourite units were the ones on algorithms and data structures.

Getting your hands dirty writing terse and efficient code, and eventually getting it working, is super rewarding. It also encourages you to use your imagination to approach problems from different angles.

Although I’ve dabbled in various clubs and societies (as I recommend everyone do), I really became involved with MonSec, the Monash Cyber Security Club. It was gaining enough popularity to be accepted as an official club, so I joined the committee.

This leadership role put me outside my comfort zone, but since I was interested in the topics and excited to share my knowledge with others, it was very fun. Throughout my time at MonSec, and particularly during the challenging 2020, I learned a lot about how I approach group tasks, speak in front of audiences and maintain relationships with varying degrees of formality.

A future immersed in tech

After graduating, I want to join the exciting IT industry – most likely as a software developer. There are some real hidden gems in Australia, and of course, there are the well-known tech firms.

I’m also hoping to do some travel before I jump into full-time work.

Just do it. The Bachelor of Computer Science Advanced (Honours) connects you with bright students who are interested in the same thing as you. It’s also quite easy to switch to other IT degrees (like Computer Science) because of the course’s structure. It’s somewhat of a ‘super set’ that lets you experience just about all aspects of the IT education that Monash offers.