Computing in Melbourne: a historical tour

Find out about Melbourne's remarkable links with the earliest days of computing. Join one of our organised tours, or do a self-guided tour.

Background notes for the tour are available online. The tour may be completed on public transport.

In 2008 Monash University held a series of events to celebrate the 50th anniversary of the creation of the University. Please check the Monash website for details and timeline.

The Faculty held a number of events to celebrate and developed a timeline to highlight different activities and people involved in computing at Monash University. See the timeline https://25years.infotech.monash.edu/

The course was one of the first computer courses offered in Australia. Judy was the only female on this course in 1964. It was a one year course and was located in Canberra. Students learnt aspects of computing as well as an introduction to the public service and worked on a computer installation calle a CDC 3600. CDC was the abbreviation for the company Control Data Corporation. The PIT scheme was later taught at Caulfield Institute of Technology as a formal Graduate Diploma in Data Processing.

Upon completion, Judy Hammond returned to work in Melbourne at the Bureau in St Kilda Road, before working as a Programmer/Researcher, with the Higher Education Unit, Monash University in 1968. She then moved to the NSW Institute of Technology/ University of Technology, Sydney to work as a lecturer from 1969 to 1998. Judy also worked with many federal and state government computer projects in education. She was an early member of the Australian Computer Society and IFIP. She was the first woman to chair an IFIP TC Chair. 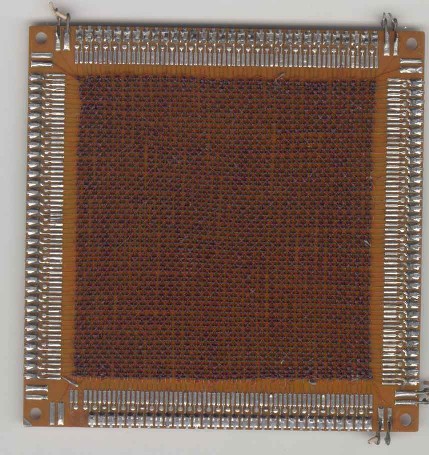 Core Memory from the B5500 mainframe computer which was installed in 1969 in the Computer Centre, Clayton, Monash University. Donated by Ralph Klimek..

The mainframe was produced by the American computer company Burroughs Ltd. The computer had magnetic core memory and could have one to eight modules of 4,096 words each. Memory modules are functionally independent, permitting simultaneous access through the Central Exchange by processors and 1/0 channels. Read access  time: 2usec/word, 250 nanoseconds/ character. Note the intricate wrapped copper wiring on eachplane. MMoCH 2015.0029

The Faculty of Information Technology, Monash University launched a new book, a history of the Faculty August 2008. This book, entitled From Ferranti to Faculty: Information Technology at Monash University, 1960 to 1990 by Sarah Rood examines the background of the different schools and departments that are now combined to form the Faculty. The book is available from Monash ePress.

The Monash Museum of Computing History announced a public seminar at Caulfield campus, Monash University. This event was open to the general public and members of the Faculty Alumni as well as University staff and researchers.

MyLifeBits - an Experiment in Lifetime Storage