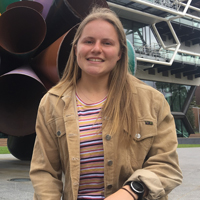 Why did you decide to study science?
I have always loved science since studying it in high school. There was not just one aspect of science that enticed me to follow the science path, rather a myriad of reasons which appealed to me. I love the sense of discovery associated with science and the opportunity for people to research into a variety of areas which interest them. Science is also continually evolving, changing and developing making this area of study particularly exciting for me and something which makes me particularly enthusiastic to learn more about. For me personally, I always knew that I had a keen interest in chemistry and especially geology. In studying science, I knew I would be able to pursue these endeavours and passions. Additionally, the application of science and the skills science students learn at university are highly valued by employers, which aids career prospects. These skills also build a highly knowledgeable, experienced and capable individuals, which create talented people both professionally and personally.

What made you choose Monash Uni in particular?
I actually found deciding on which university to study at quite challenging due to multiple factors. However, upon visiting Monash on the 2016 Open Day I was sold. What really struck me was the friendly, modern and exciting environment which Monash conveyed on that day. The students I spoke to were so knowledgeable, patient, helpful, friendly and showed genuine interest in myself and my needs. I felt that I was appreciated and accepted at Monash even though I hadn’t even graduated high school yet! I also loved the facilities and open spaces at Monash. I was able to explore the Monash Earth Sciences Garden, the chemistry labs and lecture rooms which all impressed me greatly. Another aspect that surprised me in a good way was the sense of community at Monash. With multiple cafes, lunch spots, sporting grounds, quite places, study spaces and smiling faces I felt safe, comfortable and happy at Monash. Since my first day at Monash on Open Day, to three years down the track, my experience at Monash has been better than I could have imagined and I’m so thankful that I made the right decision three years ago!

What's your favourite aspect of studying science?
This is a challenging question but it would have to be the ability to go on multiple field trips. From walking the streets of Elwood to understand flood risks and mitigation techniques, to mapping structural geology in Broken Hill and Buchan, to going underground in Bendigo to understand gold mineralisation and to learning about sedimentation and erosion at Phillip Island, each experience has been invaluable. I know that the skills I’ve learnt through studying geology at Monash will equip me well for my future career. By going on all these field trips and camps I have also made long lasting friendships which I will endeavour to keep beyond university.

What do you plan to do when you graduate?
Next year I will be starting as a full time Graduate Geologist in the GHD two-year Graduate Program. Specifically, I will be working in the Tunnels and Geotechnics team working on a wide range of projects. I’m so excited to start, meet new people and grow as a professional. I know that the working environment will be a lot different to studying at Monash but I’m eager to start a new chapter in my life and build my profile professionally! Before I start next year in February, I will take the time to go on some adventures such as hiking the Annapurna Circuit Trek in Nepal.

What has been the highlight of your science degree so far?
The highlight of my science degree so far has been the recent winter unit trip to the Broken Hill region (specifically Eldee Station) for geology. The unit was three weeks in outback NSW with very little reception but with some of the best people you could meet. We mapped approximately 8 hours in the field each day trying to understand the structural geology in this highly complicated area. The unit was highly challenging both physically, conceptually and mentally but I would definitely go back in a heartbeat. The field skills I’ve learnt as a result of the trip are invaluable and the friendships made are priceless.

What's the biggest misconception you had about studying science before you started your course?
Probably the biggest misconception about studying science is that I was told that you need to do further study, such as Honours, in order to be employable in industry. I have proved that this is not the case, however I was not just handed my graduate position either. Multiple factors combined in order to give me the best chance to be employed after completing my undergraduate degree. I had to be conscientious by consistently receiving high marks as well as being involved at university and in the community through doing volunteer work and being on the Monash Science Society committee. I also had leadership experience through being involved in university programs and having a part-time job and I organised work experience in my field to further aid my career opportunities. I understand that further study may be more necessary for other areas in science before being employable, however it is definitely not imperative as you can be employed in your field of interest by only completing an undergraduate science degree.

If you were to give some advice to someone who's thinking about studying at Monash Science, what would you say?
I would 100% say, don’t over think it, just do it. I think the problem many young people face is that they don’t know what they want to study specifically but they may broadly know what they enjoy. If they broadly like science they should definitely choose to study it as there are a wide variety of units to choose from and there’s every possibility that they may find something they love.

Give us a life hack or piece of advice you live by
The biggest piece of advice I live by is that there is always a positive to every situation, even if it’s small or you have to find it. I think that this is also linked to my belief that everything happens for a reason and so instead of being upset for an extended period of time about something that has happened there may actually be a hidden meaning or positive long term result from the event.