Antarctica in 2070: What future will we choose?

Choices made in the next decade will have long-term consequences for Antarctica and the globe, according to research published today in Nature.

The study explores how Antarctica and the Southern Ocean will change over the next 50 years, and how those changes will impact the rest of the globe. Two scenarios are considered: one in which greenhouse gas emissions remain unchecked, and one in which strong action is taken to limit emissions and to manage increased human use of Antarctica.

In the high emissions narrative, by 2070 major ice shelves have collapsed, sea level rise has accelerated to rates not seen in 20,000 years, ocean acidification and over-fishing have altered Southern Ocean ecosystems, and failure to manage increased human pressures has degraded the Antarctic environment. 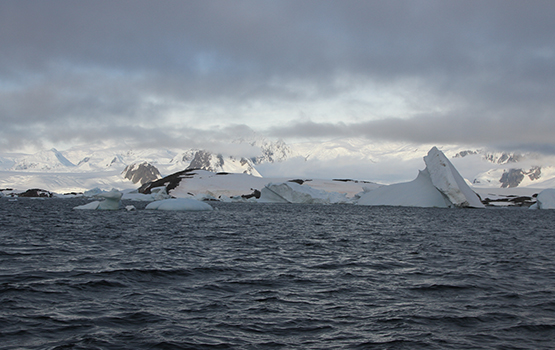 Antarctic environments are changing quickly. How this continues is up to us, as the work in Nature demonstrates. Image Credit: S.L. Chown, Monash University

In the low emissions narrative, Antarctica in 2070 looks much like it does today. The ice shelves remain intact, Antarctica makes a small contribution to sea level rise, and the continent remains a “natural reserve, dedicated to peace and science” as agreed by Antarctic nations in the late 20th century.

“The message from this work is clear,” co-author Professor Steven Chown of Monash University’s School of Biological Sciences and President of the Scientific Committee on Antarctic Research said.

“Global sustainability depends on a rapidly closing window of opportunity.”

“If we take action now, to limit greenhouse gas emissions, Antarctic environments will remain much as we have come to know them over the past 200 years. If we do not, they will change dramatically, and through their connections to the rest of the Earth System, result in global impacts with irreversible consequences.”

The scenarios, based on the best available science, represent plausible futures rather than predictions.

The high emissions narrative assumes that little action was taken to respond to environmental and human pressures on Antarctica. As a result, the Antarctic environment was hit by the combined effects of warming, ocean acidification, spread of invasive species and unrestricted growth in human activities, resulting in a degraded environment and altered ecosystems.

The low emissions narrative assumes that Antarctic nations worked together to establish policies to manage the environmental and social pressures on the continent. Antarctic ecosystems remained largely unscathed, as warming and ocean acidification were kept in check, and growing human use of Antarctica for tourism, fisheries and bioprospecting was managed sustainably.

“Continued high greenhouse gas emissions risk committing us to changes in Antarctica that will have long-term and far-reaching consequences for Earth and humanity,” lead author and senior scientist with CSIRO’s Centre for Southern Hemisphere Oceans Research and the Antarctic Climate and Ecosystems Cooperative Research Centre in Hobart, Dr Steve Rintoul said. The future of ice shelves and ice sheets will be determined by us, but the window for such decisions is closing fast, as the work published in Nature shows. Image credit: J.E. Lee (with permission).

“Greenhouse gas emissions must start decreasing in the coming decade to have a realistic prospect of following the low emissions narrative and so avoid global impacts, such as substantial sea level rise.”

The nine international authors, all winners of the prestigious Tinker-Muse Prize for Science and Policy in Antarctica, are experts in a range of disciplines, including biology, oceanography, glaciology, geophysics, climate science, and policy.