An international research team from China, UK, Canada, and Monash University has discovered the first and oldest preserved soft tissue of a terrestrial gastropod – a snail – in the fossil record. 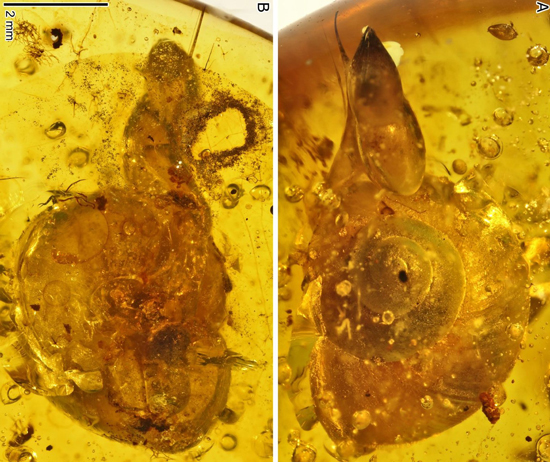 The discovery is highlighted in a study published in the journal Cretaceous Research.

The oldest terrestrial snail recorded from the fossil record with soft tissue preserved, including the head region with tentacle and eye spot and also the inferred operculum.  The cyclophoroidean gastropod dates to approximately 99 million years ago and is stunningly preserved in amber (ancient tree resin) from Myanmar.
Photo courtesy of Associate Professor Lida Xing, China University of Geosciences, Beijing.

“We have demonstrated the exceptional preservation potential of amber (fossilised tree resin) with the discovery for the first time of soft tissues preserved in a snail, approximately 99 million years old, that lived in a hot, tropical environment in an ancient greenhouse Earth setting,” said study co-author Associate Professor Jeffrey Stilwell, a palaeontologist from the Monash School of Earth, Atmosphere and Environment.

“It is absolutely extraordinary for the fossil record to produce such stunning preservation, which is exceedingly rare for any fossil of this age, especially snails and many other animals,” he said.

The discovery is the first and oldest preserved soft tissue of a snail in the fossil record from the mid-Cretaceous of Myanmar.

The snail dates from c99 million years ago and is preserved in amber/burmite with its cephalic (head) region and tentacle with eye spot and inferred operculum (the trap-door of the snail).

The combined evidence from both hard and soft parts indicates that the snails have a cyclophoroidean ancestry with modern relatives of this group living in tropical and subtropical habitats.

“Our research reveals that it is possible to preserve fossilised remains nearly 100 million years old with the extraordinary preservation of both hard and soft parts, even the most delicate of structures, such as a tentacle with eye spot of a forest-dwelling topical snail,” Associate Professor Stilwell said.

The oldest marine snails are from the Late Cambrian to Ordovician of North America.

“It is extremely rare for palaeontologists to have any soft parts to confirm an identity of the snail, which is the realm of malacology today,” Associate Professor Stilwell said.

Many of these terrestrial gastropods had similar morphologies, which made it challenging to assign them to particular groups.

“We were really fortunate in the burmite specimen to have the tentacle and position of the eye spot and also the inferred operculum,” Associate Professor Stilwell said.

“The extraordinary aspect of the discovery is to actually see the soft parts of a nearly 100- Million-year-old snail.”

Associate Professor Stilwell said most snails retracted into their shells when threatened, so the research team was very fortunate to have an example from the fossil record.