The Road to Ego 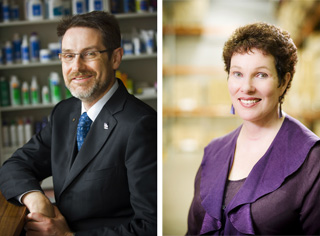 Monash alumni Alan and Jane Oppenheim are putting their diverse skills to work at Ego Pharmaceuticals, a privately owned Australian company and manufacturers of the QV Skincare range. The company invests in dermatological education and research and has subsidiaries in Malaysia, Singapore and the UK. "Details matter," says Alan Oppenheim.

Alan Oppenheim: Chemistry crept up on Alan Oppenheim. As an undergraduate at Monash in the late '70s he hadn't set out to study the subject specifically but added it to mathematics, which he'd liked at school, "just in case" he ever decided to join the family company, Ego Pharmaceuticals. But he took to it so much that by third year he was studying "full chemistry and loving it".

He says Monash taught him how much thorough planning in a complex project helps improve the chances of that project's success. "Details matter,'' he says. Oppenheim graduated after his honours year, in 1980, at a time when his father needed another chemist in the company; he started early the next year. Chemistry was vital but a lifetime surrounded by Ego had already exposed him to the breadth of the company's operations. He remembers coming back from kindergarten one day and watching his father in the lab making what is now a household brand, Pinetarsol, an ointment for irritated skin, and an employee called Eunice labelling it by hand.

He helped out in the factory as a teenager cleaning floors, dispatching packing boxes, moving drums of chemicals and doing tasks in the lab under guidance from his father. He and his brother David, who is an Ego director and runs an IT company, set up the company's first computer system, replacing the cards used to keep track of manufacturing and stock. The computer system was Alan's first priority when he joined the company as its scientific director in 1981.

Dr Jane Oppenheim: When Jane Oppenheim (nee Robson) was a girl she chanced on a television series The Beauty Queens one day and watched fascinated as Estee Lauder, Elizabeth Arden and Helena Rubinstein poured and blended the cosmetic potions that were making them famous. "Wouldn't that be great!" she said to herself, later putting the thought aside.

At school she loved the certainty and the high marks she could attain in maths and chemistry, and decided to study science at Monash. Monash gave her a comprehensive science background – chemistry, biology, biochemistry and mathematics – and the tools to undertake investigations, she says.

As an undergraduate, ideas of working as a teacher gave way to thoughts of becoming an academic. She went on to complete a PhD in biochemistry, investigating peptides, in 1985-6.

"People were just transcribing the human genome and starting to make peptides and being a peptide chemist was very valuable then," says Jane Oppenheim.

After completing her doctorate, she was offered a position at the Walter and Eliza Hall Institute as a peptide chemist but was made redundant by a machine that could do her work just before she started, a big disappointment.

The institute however invited her to study immunology – a new field for her but one that turned out to be a useful background for understanding dermatology.

She married Alan Oppenheim during her PhD year and joined his family's company as research director in 1990. The company makes the range of QV Skincare products, which include moisturisers and lip balms, to treatments for eczema, acne and psoriasis. It only occurred to Jane Oppenheim a year or so later that she'd joined the Beauty Queens in their dermatological pursuits. Ego Pharmaceuticals adopts a scientific approach to skincare however, investing in dermatological education and research.