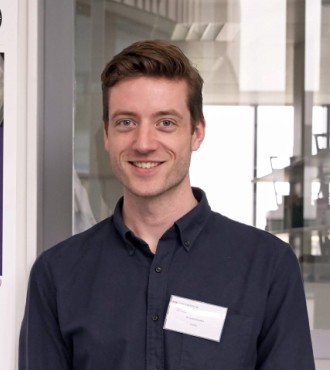 When Jason Brenker (BE(Mech)(Hons) 2013, PhD 2018) took an undergraduate elective unit in micromechanics and (on an even smaller scale!) nanomechanics, his world suddenly expanded. Not only did he meet one of his future PhD supervisors, he got hooked on microfabrication, laying the groundwork for a doctorate and lots of related travel.

“During my PhD studies, I attended international conferences in the United States, Ireland, France and Switzerland. These were fantastic opportunities to present my own work and hear from researchers based all over the world,” reports Jason. “I was also fortunate enough to perform research at the Swiss Light Source, a large synchrotron producing electromagnetic radiation a million times brighter than the sun, at the Paul Scherrer Institut. There I engaged with a multinational mix of researchers – from chemists to physicists to machine technicians.”

Now a Postdoctoral Research Associate at the University of Cambridge, Jason is quick to point out how his Monash experience got him there. “The range of projects I worked on during my graduate years helped me find my area of interest, and gave me the breadth of knowledge necessary to work with people from outside my field,” he explains. “I also had access to world-class facilities like the New Horizons Research Centre and the Melbourne Centre for Nanofabrication – I learned hands-on skills to solve complex engineering problems, working with the best equipment to design and build unique devices.”

As President of the Mechanical Engineering Graduate Association at Monash, Jason worked with other PhD candidates and postdocs to organise various events. “It was a great way to make friends in the Department, and it helped me build my own support network,” relays Jason. “In a degree that requires a lot of self-motivation, it was really helpful to talk to peers going through the same experience, sharing the difficulties and celebrating each other’s successes. Your research is your own, but you don’t need to go through it alone.”

Jason adds, “The guidance I received from my PhD supervisors, Dr Tuncay Alan and Prof Adrian Neild, was invaluable. Also, older members of the lab helped me see how to develop as a researcher, and made me aware of the various career paths available to PhDs, in academia and industry. And later, while writing my thesis in London, the support of my wife, Stephanie, got me across the line.”

Looking ahead, Jason hopes to see greater adoption of microfluidics (creating devices and processes that deal with fluid in nanolitres) across agricultural and medical technology. “I’d like to see microfluidics extend to more areas of science and technology, where it can offer benefits in accuracy and processing times,” he remarks.

Providing contrast to his academic pursuits, Jason indulges in a bit of sport. “I love cycling, which I get to do as part of my commute,” he says. “I’m also a rower when I can find the time. And, as a postgrad, I found attending Uni Games a lot of fun.” Nothing like good work-life balance for self-fulfilment.