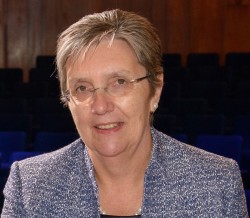 Jean is a Professor in the Faculty of Engineering,Monash University. She has extensive experience in the field of digital communications, particularly orthogonal frequency division multiplexing (OFDM)and has led a research group since 1996. This group initially worked on RF wireless application of OFDM but more recently has been a leading group in OFDM for optical communications, particularly for intensity modulated direct detection optical systems including indoor communications using visible light LEDs. Visible light LEDs can also be used as the basis of accurate positioning systems and with her team she has made a number of important theoretical and practical contributions to this emerging field. She has also extensive experience in engineering education particularly student centred learning and has led major curriculum redesign initiatives at Monash University and earlier at La Trobe University and University of Melbourne

Jean Armstrong received the B.Sc. (First Class Honours) in Electrical Engineering from the University of Edinburgh, Scotland in 1974, the M.Sc. in Digital Techniques from Heriot-Watt University, Edinburgh, Scotland in 1980, and the Ph.D. in Digital Communications from Monash University, Melbourne, Australia in 1993. From 1974-1977 she worked as a Design Engineer at Hewlett-Packard Ltd., Scotland. In 1977 she was appointed Lecturer in Electrical Engineering at the University of Melbourne, Australia. Since 1977 she has held a range of academic positions at the University of Melbourne, Monash University and La Trobe University. She is currently a Professor at Monash University. Her research interests include digital communications, engineering education, and women in engineering. She has published numerous papers on wireless and optical communications papers including over seventy on aspects of OFDM. Her work on OFDM has also led to a number of commercialized patents.

Professor Armstrong has been the recipient of numerous awards including induction into the Victorian Honour Roll of Women, 2014 IEEE Communications Society Best Tutorial Paper Award. Peter Doherty Prize for the best commercialization opportunity in Australia in 2006 (joint winner), Institution of Engineers, Australia, Engineering 2000 Award, Zonta International Amelia Earhart Fellowship and Caroline Haslett Memorial Scholarship. She served on the ARC College of Experts from 2012 to 2014 and the ARC ERA Research Evaluation Committee in 2015. She has served on numerous technical program committee. She is currently an Associate Editor for IEEE Transactions on Communications and was previously an Associate Editor for IEEE Communications Letters She is a Fellow of the Institute of Electrical and Electronic Engineers (FIEEE) and also a Fellow of the Institution of Engineers Australia (FIEAust).

Accurate information about the position of a person or device is essential in many situations. However, despite extensive worldwide research, there is still no positioning system suitable for many important indoor applications. The widespread introduction of energy efficient white light emitting diodes (LEDs) for indoor lighting provides an unprecedented opportunity to solve this problem by using these LEDs to transmit signals from which a receiver can calculate its position. However the theory underlying the design and analysis of position estimation using modulated optical signals does not exist. This project will develop this fundamental theoretical basis and apply it to create the accurate indoor positioning systems of the future.

Our aim is to create a new generation of optical communication systems. Applications will include intercontinental optical fibre backbone, high speed optical fibre local area networks and optical wireless personal area networks based on infrared rather than radio frequency transmission. Infrared wireless solves the licencing and interference problems associated with radio systems. In optical fibre applications the new technology will allow higher data rates on existing fibres without expensive replacement of the fibre. Only the ends of the systems need to be upgraded. The new systems self-adapt to give the maximum transmission capacity in any situation, just as cable modems do in copper broadband systems.

Wireless communications is a feverishly active area of research because of the recent explosion in the global demand. Orthogonal frequency division multiplexing (OFDM) is a robust transmission technique that is being considered for the emerging wireless communication systems. Unfortunately, two drawbacks of OFDM are the high peak-to-average power ratio and intercarrier interference caused by frequency errors. Techniques to reduce both, can have significant practical applications. We will develop coding and other techniques for this purpose. The project will produce significant conceptual advances on new coding techniques, efficient signal design methods, and theoretical results of wider applicability.

The objective of this project is to develop the underlying theoretical and practical basis on which a new generation of optical wireless communication systems will be based. These will combine orthogonal frequency division multiplexing (OFDM) and multiple input multiple output (MIMO) techniques. By using optical rather than radio frequencies (RF), these have the potential to combine the data rates of optical with the mobility and cost effectiveness of wireless. The use of optical frequencies avoids the limited spectrum and licencing issues of RF. They will fill many gaps in existing broadband delivery including providing a new flexible last-mile technology and an alternative form of high speed network connectivity for indoor use.

Building on a strong platform of existing research excellence, the Aim of the Network is to facilitate nation-wide collaborative research promoting four intersecting research Themes: Mobile and Wireless Communications, Rural Communications, Broadband and Optical Networks and Fundamentals of Emerging Media. Each Theme is formulated to drive multidisciplinary, innovative research as well as inspire new collaborative initiatives. Four programs encapsulate the core activities of the Network: Research mobility, Workshops and Conferences, Postgraduate Education, and Knowledge Management Systems. The Network is expected to add significant value to pre-existing investments and raise the profile of Australian telecommunications research.

Construction of an OFDM communications system