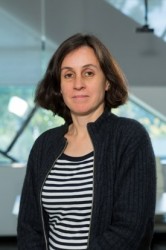 Laure works at the Monash Centre for Electron Microscopy within Office of the Vice-Provost (Research and Research Infrastructure) at Monash University as an Associate Professor. She is also Adjunct Research Fellow at the Department of Materials Science and Engineering.

Laure Bourgeois’s area of expertise is in the application of advanced transmission electron microscopy techniques for the determination of the atomistic structure of inorganic materials. My current research interests include the nucleation and growth of solid-state precipitates in light alloys and curved graphitic structures.

Solid-state precipitates are key features of the microstructures of many natural and artificial materials and govern their properties. Yet understanding, let alone designing, the microstructures of materials remains a formidable challenge. The recent discovery of a new class of embedded interfaces in aluminium alloys offers the prospect of determining the atomic-scale mechanisms of precipitation. In this project we will apply the latest microscopy and computational techniques synergistically to characterise such interfaces and develop atomic-scale mechanisms of nucleation and growth in model alloy systems. This work will constitute a major step towards practical control of solid-state precipitation in technologically important materials.

Magnesium extrusion alloys developed for improved fuel efficiency and green environment suffer from a tension-compression yield strength asymmetry problem: they are strong under tension but weaker under compression, thus limiting their use in high-strength applications. An unusual annealing strengthening phenomenon of magnesium extrusion alloys was recently discovered that offers a significant opportunity to solve this problem. In this project, advanced experimental techniques, including high-resolution electron microscopy, will be used to reveal the mechanisms underlying this annealing strengthening phenomenon. The outcomes are likely to form the scientific basis for developing next-generation magnesium wrought alloys.

To install in a central location at Monash University a digital image plate reader and appropriate recording hardware and software as a multi-user facility for high-resolution electron imaging and diffraction. Imaging plates are, in appearance, like photographic film and are used in the electron microscope in the same way. They are, however, nearly a hundred times more sensitive, have a range a hundred thousand times greater, and, when interrogated by a reader, generate a digitised output and can then be used again. We propose to exploit those characteristics in the study of advanced materials, in the investigation of phases changes, and in the characterisation of materials not sufficiently stable in the electron beam to observe by more conventional methods.

Imaging and Modelling of Nanoscale Aggregates in Light Alloys

The various nanometre-scale forms of graphitic carbon have been strong candidates for use as novel building blocks in electronic, opto-electronic and electro-mechanical devices. However, their development has been hampered by a lack of control of the type, quality and homogeneity of structures produced by conventional methods. This project aims to fabricate and characterise thin films of ordered, high-quality carbon nanostructures. A novel synthesis route, involving the controlled deposition of carbon onto template substrates, is proposed. The products will be studied with near-atomic resolution to understand their formation mechanisms, and hence approach the goal of elaborating carbon-based nanodevices.

High strength light alloys are nanostructured materials, deriving their mechanical properties from nanoscale dispersions of strengthening precipitate phases controlled by alloy composition and thermomechanical processing. Atom-probe field-ion microscopy and high-resolution electron microscopy will be combined to study the aggregation of solute atoms that precedes formation of the precipitate phases. Experimental studies at high spatial resolution will be complemented by elastic strain energy calculations and first-principles modelling of the aggregation behaviour, to define its role in controlling precipitation processes and thus properties. The work will provide a basis for improved alloy design and a platform for computer-aided design of high-performance alloys.