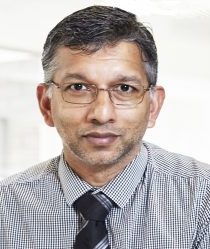 Malin Premaratne is an electrical engineer with diverse interests and physics, mathematics, bio optics, and computer science skills. He has pioneered many novel techniques, in theory, modelling and simulation of light generation (e.g., lasers and spasers) and light interaction with guided (e.g., optical fibre) and scattering media (e.g., biological tissue) and published over 250 journal papers (and additional over 100 conference papers), two books and four book chapters.

Malin has made significant and lasting contributions in modelling quantum devices, particularly lasers, spasers, and optical amplifiers. Much contemporary scientific knowledge arises from modelling, and its importance is, if anything, growing. With the proliferation of high-performance computers, the current practice creates complex models and solves them numerical to study their behaviour. However, much insight and understanding are lost in such ways. Malin has approached modelling complex quantum energy sources in a hybrid form where he captures essential physics (e.g., using quantum electrodynamics (QED) ) but blends that with engineering philosophy (e.g., signal flow graphs, transfer functions) where practical use and analytical tractability are given priority. It combines formal reasoning with intuitive insights. Even though Malin and his coworkers’ associated body of work spans decades, Cambridge University Press has published the central ideas in the text “Theoretical foundations of nanoscale quantum devices” (2021). The profound impact of this work on the research community and society is noteworthy. Examples include new-theory (QED tailored for nanodevices), novel-devices (carbon-spaser), commercial-software (VPI configuration design suite), improved design of hardware (Agilent external-cavity lasers), and quantum-enlightenment for engineers; an insightful understanding of the design and operation of quantum devices. Malin’s main contributions are in theory, solution methods, and computation. Thus, Malin has an immense impact on developing human skills in disseminating scientific knowledge by training researchers in the art of modelling active optical devices. Malin has won over $4.0 million in direct funding, over $4.2 million in student scholarship funding, and about $750,000 on computer resources and time from competitive grants agencies, including the Australian Research Council (ARC) for this work. He has spent most of this funding to train over 60 PhD students to completion.

Malin has spent one-third of his career in industry before joining academia. From 1998 to 2000, he was with the Photonics Research Laboratory, The University of Melbourne, where he was the Co-project Leader of the CRC Optical Amplifier Project and was also associated with Telstra, Australia, and Hewlett Packard, USA. From 2001 to 2003, Malin worked as a consultant to several companies, including Cisco, Lucent Technologies, Ericsson, Siemens, VPISystems, Telcordia Technologies, Ciena, and Tellium. Since 2004, he has guided the research program in high-performance computing applications to complex systems simulations at the Advanced Computing and Simulation Laboratory, Monash University, Clayton, where he holds many senior positions and is a Full Professor. He has visiting appointments with The University of California Los Angeles (UCLA), Jet Propulsion Laboratory at Caltech, Oxford University, The University of Melbourne, and Institute of Optics University of Rochester. Malin has given presentations on optical devices’ modelling and simulation at many major international meetings, schools, and scientific institutions in the USA, Europe, Asia, and Australia. Currently, he is an associate editor for IEEE Photonics Technology Letters, IEEE Photonics Journal, and The Optical Society (OSA) Advances in Optics and Photonics Journal. Professor Premaratne is a Fellow of the Optical Society of America (FOSA), a Fellow of the Society of Photo-Optical Instrumentation Engineers USA (FSPIE), a Fellow of the Institution of Engineering and Technology UK (FIET),  and a Fellow of The Institute of Engineers Australia (FIEAust).

The SPASER is a new type of nano-size amplifier which is analogous to a transistor in modern electronics but operates more like a laser. It will be possible to build ultrafast processors of information with SPASERs replacing transistors or can be used in nanosensing, nanoimaging and many other fields. In this project, we assemble a world-class team consisting of one researcher who first pioneered the concept of SPASER and others who developed design and analysis techniques in the context of semiconductor lasers and detectors to engineer SPASER design. Our aim is to make robust, fast and efficient SPASERs which resembles the features of current lasers for use in circuits in the smallest possible size that consume lowest possible energy.

Man-made material composites called optical metamaterials which constitute a new, 21st century area of engineering science. They can be engineered in such a way that both electrical and magnetic components have stronger interaction with the metamaterials structure, unrevealing many extraordinary properties such as magnetic behaviour in glass type substances and ability to bend light in any direction. In this project, we enhance the usability of metamaterials by strengthening their interaction with light by reducing losses through novel designs. The creation of these new generation materials and engineering their properties to suit novel applications will sure to underpin the growth in many industrial and economic activities in Australia.

Silicon is a material where the extraordinary is made ordinary. Silicon continues to dominate the microelectronics industry because of its wide availability and remarkable chemical, thermal and mechanical properties that enable easy processing to vastly alter its properties. Siliconized optics (or silicon-based optics) provides a new platform for the monolithic integration of optics and microelectronics. In this project, a multi-disciplinary team consisting of pioneers of nonlinear optics and siliconized photonics build a next-generation broadband silicon optical amplifier which can open the door to a new hybrid technology enabling the realisation of low-power, wide-bandwidth, high-speed and ultra-small optoelectronic devices.

This project will set up a virtual organisation for tsunami related data analysis using grid technology. Due to geologically remote areas/countries involved the sharing of seismic, tidal and other locally gathered tsunami related information is critical to issuing a warning. In collaboration with Australian and International partners, this project will explore: new avenues of tsunami-related data collection, which are currently not available; new data fusion methods; data sharing strategies; visualisation and analysis methods, and develop sensing methods to gather data on animal behaviours often reported as a possible way of identifying similar disasters.