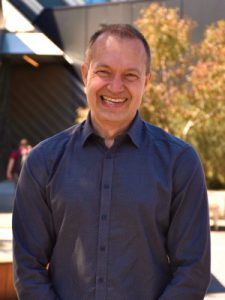 The global population is consuming more than 14 terawatts of power every second. It is an amount of energy almost beyond comprehension, and yet by the year 2050 this consumption could double. Alternative energy researcher Associate Professor Udo Bach believes only a significant increase in solar energy use can satisfy this demand for power. Udo’s work has always been driven by an awareness that our modern society is under threat from its own lust for energy. It is the reason he travelled to Switzerland as a PhD student to work with world-renown energy scientist and inventor of the dye-sensitised solar cell, Professor Michael Grandauml;tzel at the Swiss Federal Institute of Technology Lausanne. Dye-sensitised solar cells potentially offer next generation advantages over conventional solar panels, especially in terms of simplicity and cost. Although the new cells have been the subject of great endeavour, their effectiveness has not been on par with high-performance silicon solar cells. This is where Udo’s work begins. Almost a decade after beginning his research with Professor Grandauml;tzel, Udo is now developing several new technologies to capture the potential of dye-sensitised cells. Working within the Victorian Consortium for Organic Solar Cells, Udo is confident that the new type of solar power has a key role to play in meeting the future energy needs of the global population, without irrevocably damaging the Earth. “Our contribution could be that we provide a disruptive photovoltaic technology, one which is a clear step from where we are now,” Udo says. “Currently photovoltaic technology is getting cheaper only in scale with the volume we produce. We are hoping that we can come up with something that is an important step, and will dramatically change the situation. “I’m almost certain that within the decade photovoltaics will become extremely important and play a major role in global energy. Soon we will see photovoltaics in a position where it is economically viable and people might opt for photovoltaics as an energy solution simply because it’s cheaper, not just because it’s cleaner.”

Udo is tackling the practical challenges of enhancing dye-sensitised cells through several different technologies. He has pioneered the theoretical foundations of boosting the output of organic cells by stacking them in tandem in a process similar to conventional solar cell arrangements. This process could boost energy conversion beyond current limits. He is also developing back-contact solar cells. This technique removes the collecting electrode from the top of cells and links the previously separated positive and negative charge collectors at the back of the cell, ending a problem of shading. Along with Monash colleagues, he is working to find non-corrosive alternatives to the liquids presently used to transport charge internally. Such a development would allow the use of new materials in cell construction, potentially leading to conversion increases. Udo’s energy work is complemented by his nanotechnology research as a Technology Research Fellow with The Melbourne Centre for Nanofabrication. He is engaged on a project where he is developing novel nanofabrication technology, combining conventional ‘top-down’ fabrication techniques with new ‘bottom-up’ assembly techniques. With the use of blue prints from conventional nanopatterns, he has created nanostructures from nanometre-sized building blocks. He will then be able to perfect a universal assembly technique for use in future generations of solar cells, computing devices and sensors.

The aim of this platform is to establish a comprehensive analytic tool-box for the characterisation of solutionprocessable materials for thin-film solar cells based on materials such as perovskites. These materials have excellent light harvesting properties with absorption edges beyond 800 nm. A particular focus will be made on time-resolved transient absorption and microwave conductivity phenomena and on lock-in thermographic imaging capabilities. This will accelerate the ongoing materials and technological development in this strongly emerging research field.

Facility for exploring light-matter interactions in space, time and energy

This proposal aims to create a readily accessible facility consisting of a suite of tools for the study of light-matter interactions in materials, molecules and biological systems. The facility – co-located at Monash, Swinburne, RMIT, ANU and UNSW – intends to combine local probes and pump-probe spectroscopy methods (from the visible to the far-infrared) for studying nanoscale femtosecond dynamics. It will be accessible to a broad user base and the first in its kind in Australia, cementing Australia’s leadership in ultrafast spectroscopy techniques and nano/biomaterials, with projects spanning from novel topological materials, 2D semiconductors, light-harvesting charge transfer complexes, biological systems, to artificial metamaterials.

The Role of Molecular Dipole Layers on Charge Carrier Separation

Concepts Towards the Next Generation of Dye-Sensitized Solar Cells: Tandem and Plasmonic Solar Cells

The prospects of global climate change and its impact on our planet are now demanding a swift and radical change towards carbon neutral energy sources. Dye-sensitized solar cells (DSCs) are viewed as a potential low-cost solution that can help to tackle our current energy crisis. This proposal aims at exploring the feasibility of novel device concepts to enhance the performance of DSCs. These concepts include tandem solar cells as well as novel energy relay systems based on the ability of nanoparticles to effectively act as antenna systems that can absorb light and funnel their excitation energy towards a sensitizing dye molecule. The targeted outputs will be innovative milestone papers, patents and follow-up commercialization projects.

The term “ultrafast revolution” describes the transformations in science due to ultrafast laser technology. Today, ultrafast lasers are used in surgery, nanomaterial fabrication, biomedical imaging, spectroscopic investigations, and new applications are still emerging. This facility will draw together leading chemists, physicists, and engineers to investigate key ultrafast processes and phenomena in the physical, biochemical and material sciences. This is of strategic importance to keep Australia at the global forefront for scientific endeavours, supporting new research and commercial opportunities. This facility will also produce highly trained graduates, who will find employment in industry throughout Australia and globally.

The equipment sought through this proposal will support a fast growing team of internationally recognized scientists, in their quest to develop advanced nanomaterials for the next generation of photovoltaic devices. The combined fabrication and characterization facility is unique to Australia and will help to provide critical infrastructure that is currently only available through overseas collaborations. It will enables researchers to (1) efficiently integrate novel electromaterials into state-of-the-art photovoltaic devices and compare their performance to current benchmark materials and (2) study electron transfer and transport dynamics in order to reveal the material properties that govern the electronic behaviour of these materials.

The Universities of Melbourne and Monash, CSIRO and Securency as the Victorian Organic Solar Cell consortium (VICOSC), is now developing low cost organic solar cells as well as printing methods for the mass production of large area organic solar cells. As a printing method, gravure printing has been studied in collaboration with Securency International. Spray deposition of active materials has also been studied as an alternative printing technique in Bio21 and has successfully been used to deliver larger area organic solar cells. The advanced ultrasonic spray deposition system will provide a more systematic study of deposition techniques for the roll-to-roll production as well as potential fabrication of laboratory prototype devices.