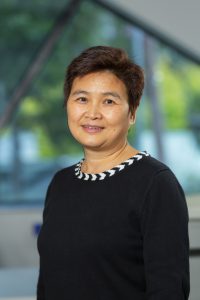 Prof Xinhua Wu is a Fellow of Australia Academy of Technology and Engineering(ATSE), Fellow of IoM3, UK, world-leading expert in aeroengine and aircraft materials and their manufacturing, in particular 3D printing. In 2014 she 3D printed the world’s first full size jet engine and in 2016 achieved international aerospace qualification for 3D printed Ti components for civil aircrafts C919. She is also the founder Director for Monash Centre for Additive Manufacturing (MCAM) since 2012 and Director for ARC Industrial Transformation Research Hub(ITRH) for high value additive manufacturing since 2014. She is also the Director of ARC Centre of Excellence for Design in Light Metals since 2011. This Centre was consisted of more than 100 researchers and academics from six universities with its research activities focused on Al, Mg and Ti alloys.

Australia’s unique natural assets could allow the country to play an important role in the global aerospace industry. The potential of the local industry has received a significant boost with the arrival at Monash University of Professor Xinhua Wu, an established expert who has the attention of the biggest names in aerospace.  Xinhua moved from Europe to Australia to head the ARC Centre for Excellence for Design in Light Metals, a collaboration of six universities and more than 100 researchers. However, Xinhua did not make the trip alone. In addition to an impressive resume that includes 12 patents and more than 120 refereed papers, Xinhua also brought with her some of the biggest names in the aerospace industry. International giants Bombardier, Airbus/EADS, the European Space Agency and Microturbo have all placed research contracts with Xinhua and the ARC Centre since she arrived in Australia. The industry appeal of her research lies in her expertise in titanium (Ti), titanium alloys and their manufacturing processes. Titanium is one of the three key metals of modern aerospace science, along with magnesium and aluminium. However, titanium research is still in its relative infancy, and offers the greatest potential for design and performance improvements.

Xinhua has been involved extensively in Ti and titanium aluminide (TiAl) alloys and in advanced powder processing, in particular for Ti and nickel alloy powders. Her research into alloy development and characterisation covers a range of Ti alloys (Ti64, Ti6246, Ti-15-3, Ti-15-3-0.1C, BuRTi, Ti5553andhellip;), TiAl (Ti4522XD, Ti46Al8Taandhellip;), nickel-titanium and nickel-titanium-copper shape memory alloys, niobium-silicon ultrahigh temperature alloys. Her recent activities are mainly on development of innovative manufacturing, including laser additive manufacturing and net-shape HIPping (hot isostatic pressing) which are technologies able to produce complex 3D components from computer designs in a single step, which leads to a reduction in current manufacturing cost by 30-50 per cent, a reduction of material wastage by 90 per cent and a reduction of lead time from 24 to three months for Ti, Ni, Al and steel structural components. Xinhua is confident that Australia can capitalise on its rich titanium deposits and create a viable local industry by pairing leading Australian aerospace researchers, such as those at the ARC Centre, with international companies. “Australia is the largest producer of titanium ore, which makes you think why don’t we actually turn that ore into some product, but what you need is a local pull of manufacturers and the users who need the metal,” Xinhua says. “The only thing that can make that happen is if there are innovative manufacturing processes or new materials developed by Australia. “People don’t realise that the aerospace industry is very technology-driven, for them it is not just about making a shape with the metal, it is always competing about what is the better material, what is the lighter material, wanting materials to be cheaper but equally as good — it is constant driving on that. “So when we bring these leading companies here, I want them to work with the ARC Centre academics and incorporate all that applied research with the fundamental metallurgy knowledge here and see it into products.” Xinhua and her colleagues are also equipped to design manufacturing processes to suit each new material developed. She is confident that, with the appropriate support from the government, Australia could become a serious player in the lucrative global aerospace industry.

Professor Xinhua Wu’s research interest are in the following areas,

The Government has made rail a national priority for investment. This project focuses on using laser cladding technology for the repair and preventative maintenance of passenger and heavy haul railway tracks in Australia. The outcome will ensure the structural integrity of rail infrastructure, which is critical due to the increasing freight demand.

This project will establish a world class, globally-linked and industry-focussed research hub to underpin the uptake of metal alloy based additive manufacturing (including 3D printing) in Australia. Its research will cover the issues that need to be resolved for success, including the effects of non-equilibrium solidification, process optimisation to achieve quality, consistency and repeatability, and new user-friendly design tools to realise the benefit of free-form manufacturing. Real components will be studied to give immediate impact. The hub will also train highly skilled people that will be needed for this growing industry.

Research, Design and Manufacture of Hastelloy Filters through additive manufacturing

A 3 stage project in which filters for CENOVUS FCCL LTD will be designed, appropriate additive manufacturing parameters for Hastelloy B3 powder will be researched and established. Finally the filters of varying geometries will be manufactured as required by CENOVUS FCCL LTD.

A Hot Isostatic Press(HIP) for Aerospace and Biomedical Component Processing

The buy-to-fly ratio for aerospace applications can be as high as 40:1. Near net-shape manufacturing such as laser additive manufacturing, net-shape HIPping or metal injection significantly reduce this ratio and revolutionise the aerospace manufacturing industry as well as be advantageous in fabricating complex components for biomedical and other high-value added products. The key challenge for those applications is to guarantee sufficient mechanical properties and process repeatability. The requested HIP is used to develop the net-shape HIPping process for alloy structures prior to its scale-up and to close porosity and remove thermal residual stress in laser additive manufactured components to ensure its superb mechanical properties.

The Centre will develop new alloys and energy-efficient manufacturing processes for light metals by carrying out strategic and applied research directed jointly by academic and industry participants.

Manufacture of a small demonstrator aero-engine entirely through additive manufacturing

The objective of this work is to construct components with designer microstructures by the using the cold spray deposition technique. The novelty of this project comes with the intention to spray not a single powder type but multiple powders of the required constituent phases, and using hot isostatic pressing to achieve the final desired property envelope. New materials with unusual property specifications, which cannot be made by the conventional ingot-based processing routes, can thus be achieved through optimisation of the size, morphology and distribution of the alloy phases in the deposited component. The challenges are in machine modification and the design of the desired microstructures to meet property requirements.

The Centre will adopt a systematic process of ‘virtual materials selection’ to assess modifications to the property profiles of light metals systems that will maximize the competitiveness of light alloys and new light metal hybrid materials based on aluminium, magnesium and titanium. Using a novel ‘design-directed’ approach to fundamental research, it will address strategic design targets through innovations in structural design at the nanoscale and advances in processing, to enhance the properties of existing alloys economically. It will also embrace innovation in design of light metal systems to create novel hybrid and surface-modified materials that expand the range of properties available and thus the applications for light metals.