WikiLeaks, Snowden and the fight to get the balance right: Information Asymmetry

WikiLeaks, Snowden and the fight to get the balance right: Information Asymmetry

The flow of information is fundamental to our society. It is the backbone of successful social networks and organisations, to a productive and just society. Information, whether at scale or just a fragment, can shift history's course. The fight to address the balance of information is underway and at critical juncture.

Since the significant releases of WikiLeaks in 2010 and beyond, and, more recently the NSA spying revelations of Edward Snowden, the question of who can access information and why has been placed squarely in the spotlight. The status quo is being questioned and the gap between openness and secrecy examined and challenged on many levels.

This gap, or 'no man's land', is both a battlefield and a fertile ground for innovation and bold action. It has emerged from a growing information asymmetry, caused by government secrecy alongside mass surveillance and data capture by governments in concert with internet giants.

The response is coming from civil society, activist movements born of the internet and from nation states. It is seen in publishing and journalism, in politics and in online communities. Rights, methods of delivery, use and control over information are being tested, protested and, in some cases, reformed.

In this landscape we see:

Cassie Findlay is the Project Manager, Digital Archives at State Records NSW. In this role she is responsible for delivering the digital archives infrastructure and processes for accepting, preserving and making available digital State archives of the NSW Government.

Cassie wrote the chapter on digital record keeping in the third edition of the Australian Society of Archivists' textbook Keeping Archives, is currently the Project Lead for the ISO review of the International Standard on Records Management, ISO 15489, and is a co-founder of the record keeping and archives iscussion group the record keeping Roundtable.

In recent times, Cassie has written and spoken frequently on issues relating to archives, WikiLeaks and access to information in a range of publications and forums. 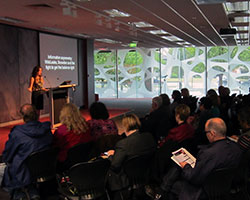 Presented by the Faculty of Information Technology and Whyte Fund Committee, this annual oration aims to provide thought leadership and inspiration in the librarianship, archives and records sector by inviting distinguished speakers to share their insights.