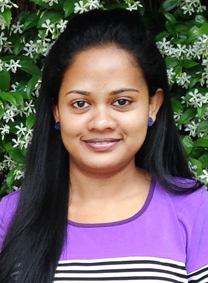 Anuradha’s dedication parallels that of the scholarship’s namesake, Dr Anita Borg, who worked to remove barriers to women and minorities in computer science. The scholarship is for female students who are on track to becoming technological leaders and role models.

In late August, Anuradha will join her fellow scholarship recipients at a retreat at Google’s campus in Hyderabad, India, where she is looking forward to meeting likeminded women from across the Asia Pacific. ‘I’m excited to hear their stories and basically to be inspired and to inspire  others,’ she said.

Anuradha completed her undergraduate studies at the University of Colombo School of Computing (UCSC) in Sri Lanka. In the final year of her IT degree, she was able to fulfil the goal she had had since she was a child, when she witnessed the aftermath of the deadly December 2004 tsunami. She designed  a system to identify corpses by skull alone, and with a National Science Foundation grant opened the first centre for forensic reconstruction in Sri Lanka.

Of her final year project, Anuradha said, “I had to prove that my group with three girls and one guy was competent in handling skulls and dead bodies. Through hard work and perseverance, I was able to convert this challenge into an opportunity and lead my group to win several awards nationally  and internationally, on top of the gold medal we won for the best research project in our faculty.”

During her undergraduate studies, Anuradha represented and supported women in computing, heading a scholarship committee and initiating mentoring projects and workshops to empower and encourage female students. She has continued that work during her time at Monash, promoting women’s participation in the Faculty of Information Technology Postgraduate Student Retreat and the Women in IT Graduate Research Network.

Anuradha’s current research aims to automate the generation of interactive floor plans, which will assist people with visual impairment to navigate unfamiliar places such as shopping centres, train stations or even office buildings. The accessible floor plans, which can used on a tablet device  loaded with the Monash-developed GraVVITAS (Graphics Viewer using Vibration Interactive T ouch and Speech) system, will make it easier to find essential facilities such as stairwells or lifts, public restrooms and exit doors. To add to her list achivements, Anuradha recently won the Faculty of Information Technology’s 3 Minute Thesis Competition, and will now go into the Monash 3MT Final. We wish her all the best!

Anuradha’s main research supervisor is Professor Kim Marriott. Anuradha would like to acknowledge and thank Julie Holden from the Faculty of IT for assistance with her scholarship application.