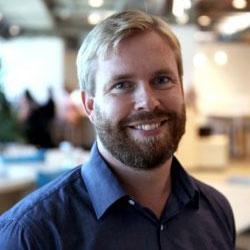 Australasia Water Leader at Arup - Daniel is a highly experienced and well regarded water engineer. He is responsible for the development and growth of Arup’s water business in Australia, New Zealand and South East Asia and has recently been awarded the Sir John Holland Civil Engineer of the Year, 2021.

This prestigious award is in recognition of his outstanding contribution to the profession and to society and is presented annually by the Civil College of Engineers Australia to an eminent civil engineer.

Daniel completed a Bachelor of Engineering (Civil) (1st Class Honours) and a Bachelor of Science at Monash University in 2001. He is passionate about water in the urban environment and identifying, developing and implementing smart solutions for cities. He has delivered major water and infrastructure projects from feasibility stage through to detailed design and construction supervision. Daniel has successfully won and delivered projects in Australia, New Zealand, Asia, South America and Africa. With a strong depth of both technical and commercial skills, Daniel has not only delivered designs and managed projects but is also experienced in different business delivery models. He has provided strategic consulting advice including risk management, technical due diligence, transactions advice and business case studies for clients.

Daniel is a Captain in the Australian Army in the Royal Australian Engineers Corps. In this capacity he has undertaken construction tasks in many indigenous communities around Australia and was awarded a commendation for his role as the Officer-in-Charge of the Australian Army’s response to the Victorian Bushfires in 2010. Daniel has and continues to work in international development water projects throughout Asia with organisations including the Australian Water Partnership, Australian Water Association, WaterAid, Engineers Without Borders, World Toilet Organisation and Live and Learn.