Despite having only recently entered the workforce, alumna Bilin Zhou (Bachelor of Laws/Bachelor of Aerospace Engineering (Honours)) has covered a lot of ground.

Learning, development and growth have been the foundation for Bilin’s success. "University provides a technical overview of many areas, but you learn a lot on the job – and you’ll continue to learn as your work evolves," she said. "It’s important to be open to working in fields that may not be exactly what you studied."

Bilin started her career negotiating and managing a suite of supplier contracts for Phantom Works International, the advanced prototyping arm of Boeing. Within a year, she's progressed to Systems Engineer at Boeing Defence Australia, where she now works on an E-7A Wedgetail fleet upgrade. She found switching roles was challenging, but was fortunate to have Boeing's support through the transition. Bilin’s team aims to achieve seamless integration of all pieces of this Airborne Early Warning and Control aircraft, with her role being to coordinate the air vehicle, communications and software teams. 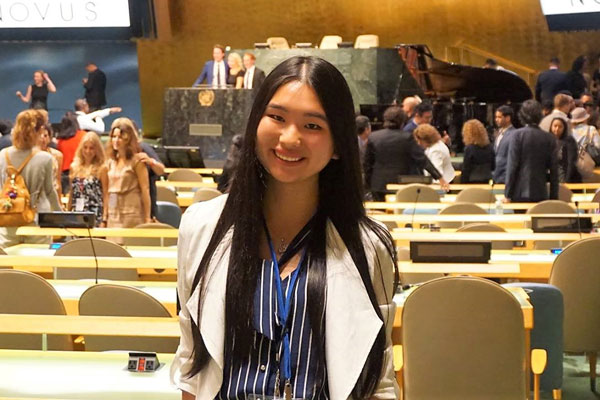 Impressed? It doesn’t even start there. Previously, as an industrial trainee at CSIRO, Bilin undertook research on spark plasma sintering of supersonic particle deposition. "My proudest achievement to date was presenting my CSIRO research at the AeroMat Conference in Seattle," recounts Bilin. I had the opportunity to present this to international experts in the field."

This wasn’t Bilin’s first international exposure though. She also participated in the Space Generation Congress in Toronto where she was involved with a group of young space enthusiasts called the Space Generation Advisory Council. Bilin joined their space law and policy project and attended a general assembly of the United Nations High-level Political Forum on Sustainable Development in New York. This latter event coincided with her study abroad of intellectual property at Harvard University. Not bad at all!

Not one to sit still, Bilin jumped at the chance to hear presentations by space icons like Elon Musk and Bill Nye at last year’s International Astronautical Congress in Adelaide. "Meeting people from around the world who are excited about space has broadened my understanding of technological possibilities and the areas we can further develop," she explained. "This has fuelled my passion for aerospace."

Passion, yes, but also confidence, an ability to adapt and continuously learn, has set the trajectory for Bilin’s career - onwards and upwards.