Read all the latest updates from the Nova Rover team live from Utah.

Congratulations to the Nova Rover Team for their very successful completion of the 2019 University Rover Challenge!  Now one of the Top 10 teams in a highly competitive international competition, we're proud of their efforts and know they'll return as a team to beat in 2020. Here's the live updates from each day of the competition:

The team woke up bright and early at 4:30am for the final task - the Science Mission. Many members got less than four hours sleep, staying up to troubleshoot and optimise the in-situ life detection instruments. Much credit to the team for their dedication as it definitely paid off! We arrived at the Mars Desert Research Station site at around 6:15am and prepared our rover. The Science Mission was a surprise for everyone – instead of a large designated area allocated for the team to choose a suitable site to drill, we were provided with a chain of five sample sites to analyse. Three were soil samples 15cm deep (one red, one grey and one pebble-like) and the other two were rock samples. 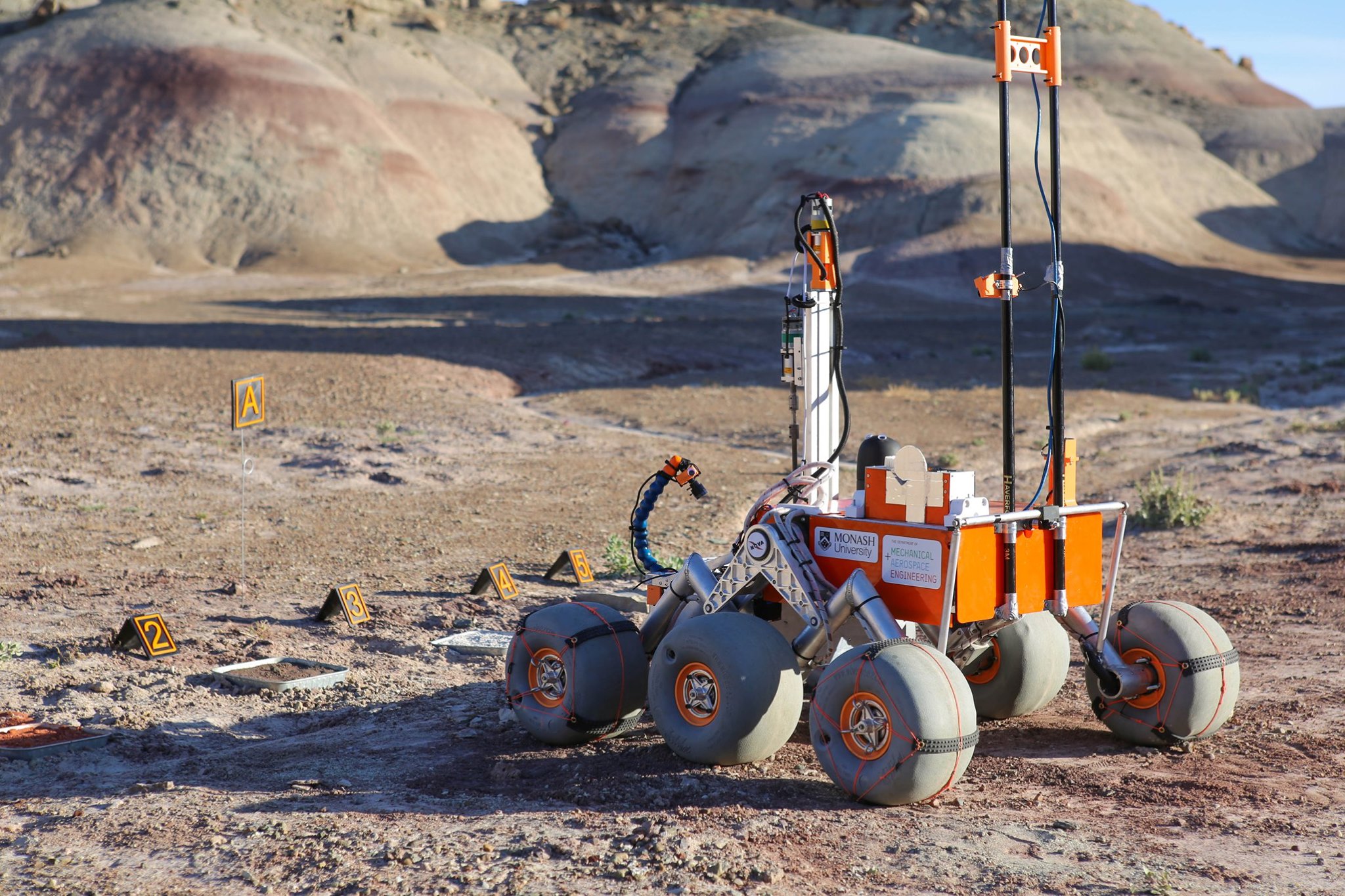 We were able to acquire a sample from Site 2 and semi-autonomously performed a biochemical and protein assay. Our suite of instruments detected proteins and enzymes within Site 2, concluding the presence of life. Unfortunately, due to the misalignment of our LED photometer, we were unable to operate at full detection capacity. Our array of five onboard cameras captured the remaining samples and the surrounding stratigraphy, providing rich, high-resolution images.
The Science team killed it in front of the NASA Ames astrobiologist judge as she asked us complex and thorough questions about our method, instruments, understanding of extremophiles and astrobiology. The team answered all of her questions and distinguished each site for extinct or extant life. We lost points for misidentifying a limestone for a sandstone, but we did exceptionally well considering the difficulty of the task and high expectations of the judges and the science team are proud of their work.

Our team finished by 8am and enjoyed watching other universities compete with their rovers. At the end of the day, the URC hosted a huge BBQ with all the teams at the Mars Desert Research Station, where Mars Society president Robert Zubrin made a speech and expressed his admiration for our work. Veteran teams were impressed with our rover and we've made great contacts with other teams and members. The final results were announced: we placed 9th out of the 86 teams that declared to compete in the 2019 URC. The team are incredibly humbled with our result, especially considering the sharp increase in difficulty and stronger competition. We’ve already begun planning how we can take home a podium position next year! 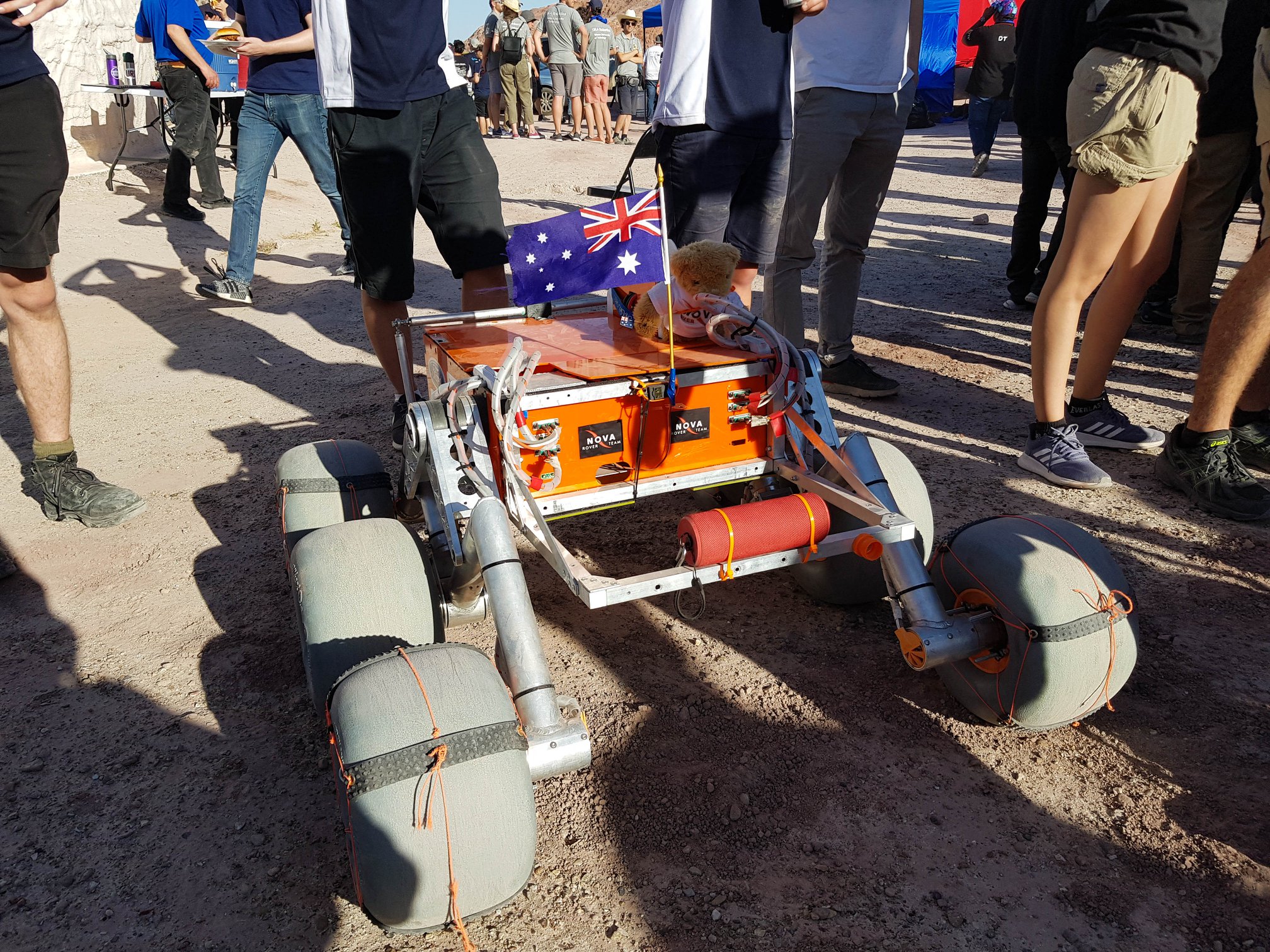 Day 2 of the University Rover Challenge saw some drastic improvements for the team, plus a few more unexpected challenges. Team Vice-Lead Iain Hammond shared the next update from Utah:

"We left the house at 8am and everything arrived as planned to the North Site of the Mars Desert Research Station to begin Equipment Servicing, an extremely difficult task. The lander module made by Protocase was at the barbecue on Wednesday night, so we'd been able to have a look beforehand. There's a drawer to put a toolbox in, which even humans struggle to do. The sides of the drawer are lined with a type of fabric that, when you place the toolbox on top, a somewhat airtight seal is formed, and the toolbox has to be pushed into the void. No teams have completed that aspect of the competition thus far, and the total best score for Equipment Servicing at this point is Stanford with 57/100. We managed to drastically improve on last year and score 22/100 for Equipment Servicing. We were able to pull out a heavy object out of a slot, open a drawer and a door, and pick up the toolbox. We also got partial points for typing 'MARS' on the keyboard (we had only the 'S' remaining when we ran out of time).  All up, this is a very impressive score, which puts us exactly in the middle of the pack of the teams that have completed this task thus far - we're 7th out of 14.

Next up was the Autonomous Traversal task. We were somewhat confident after having the rover navigate, find, stop and notify completion of a stage just yesterday. The rover started the first leg and got the first tennis ball, raised its Australian flag, and scored 10 points all within the first 5 minutes.

Unfortunately, due to a number of variables, we were unable to find the second ball. The operators could see the tennis ball on the screen, however the search pattern didn't engage and the rover kept returning to base. The task finished with the rover mounting a bush and flipping over backwards, snapping both squid poles at the top of the chassis box.

At the moment, 10/100 points for autonomous currently puts us in equal third for this task, with scores of 30 and 40 respectively being the only better ones. While we could have done better, everyone should be extremely proud of these results, we will continue to learn, evolve and improve.

Science task is up tomorrow at 7am.

Academic supervisor Dr Chao Chen said, "The tasks were highly complicated yet the team did a great job, with plenty of scope to develop better robotic design, control, plan planning and AI search capability. The team's performance has definitely taken a huge leap from last year."

The Nova Rova team came back from an incredible set of challenges to score highest on Day 1 of the University Rover Challenge. Channel 9 News North America correspondent Alexis Daish was there to capture part of the action:

Team Vice-Lead Iain Hammond shared the following update on the amazing ups and downs of the day for the team:

Today was a rollercoaster of emotions. We left the house at 12:20pm to get to Mars Desert Research Station for our 13:30pm Extreme Retrieval task start. Upon arrival, Oscar and I opened the door of the U-Haul to see the three-fingered end effector detached from the arm, damaged and on the floor of the U-Haul. The most crucial part of extreme retrieval had been destroyed in transport!

Simon and Dan G drove back to the accommodation to get a replacement part for the end effector, while the arm and electrical teams began work on salvaging all of the useful parts. Christos fell from the U-Haul and onto the mast, snapping it. Luckily, we were able to repair it, and everyone worked extremely efficiently to get the arm into an almost perfectly working condition again. The only difference was that the slip ring was omitted, so we didn't have infinite continuous rotation. We started the task 13 minutes late given we needed the extra time to repair the rover and set up. We proceeded to the first area where the challenge was to retrieve a hammer. We picked it up and dropped it off with ease to score our first 30 points. We proceeded to the next task at the rock garden and were able to identify a conglomerate rock and place it in a box for an additional 10 points. The rover then picked up a nearby water bottle, ate all of the terrain for breakfast, and dropped it off at Astronaut 1, obtaining a perfect score for stage 1.

We then moved onto Astronaut 2, easily locating the astronaut, but struggling to find the tool. Harrison’s keen eye was able to spot a small screwdriver shimmering in the ground. At the conclusion of our run, we were the only team thus far able to find and pick up the screwdriver.  We dropped this screwdriver at the astronaut for an additional 10 points, bringing our total to 70/100. We began to move onto Astronaut 3 but unfortunately, the swaying arm pushed its own emergency stop button - a horrendously unlucky event!

At the conclusion of our run, we came out with the highest score overall in the Extreme Retrieval task for the day, with the Stanford University team coming in second place with 64 points and other teams yet to complete the task.

Everyone worked extremely hard to get to this stage and are super proud of the outcome.

Academic supervisor Dr Chao Chen said, "The team performed extremely well to recover from the initial setbacks, they were quite simply an amazing team on an amazing day at the University Rover Challenge!"