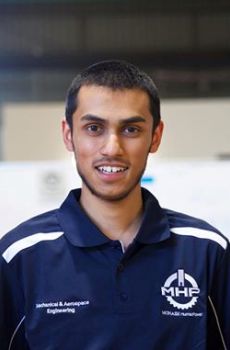 What made you choose the specialisation/major you studied?

Building and understanding the way things move is what interested me the most and mechanical was the best option to explore this.

Apart from study, what else were you involved in both at Monash and off campus? (Paid work, sport, clubs, hobbies etc)?

I was part of the Monash Human Power team - an up and coming team at Monash looking to build the world’s fastest human powered vehicle. I initially got involved because I knew I had to do something outside of my degree that made me a different and unique engineering graduate. However, as I stayed longer in the team I could see great potential in the team to achieve a goal like no other. In fourth year I became the team manager, which was a huge learning experience. How to deal with people and how to get work done are critical skills to have in the workforce and this is what being part of the team gave me. It also gave me an opportunity to apply my engineering skills, especially those in aerodynamics and mechanical design, two fields that are of the most interest to me.

What was the highlight of your course?

What advice do you have for prospective students starting uni next year?

Get involved in anything you’re interested in at uni. And if you’re doing mechanical engineering definitely try out for the Motorsport, UAS and HPV teams. The experience you gain is invaluable.