Arvin Wiyono said he was humbled to be awarded Dux of Undergraduate for being the top graduating student in the Bachelor of Software Engineering (Honours). 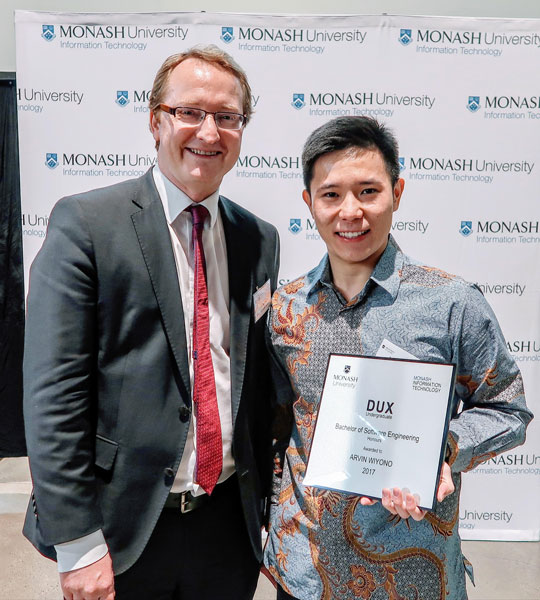 The spotlight was on student academic achievement and excellence at the annual Cliff Bellamy Awards Ceremony held at Monash University on Tuesday 17 April.

The awards are named after the founding Dean of the Faculty of Information Technology at Monash University, Professor Cliff Bellamy. Held annually in his honour, the awards are a chance to recognise some of the Faculty’s brightest students.

Arvin Wiyono said he was humbled to be awarded Dux of Undergraduate for being the top graduating student in the Bachelor of Software Engineering (Honours).

“For me, 2017 was the year of experimentation in which I decided to take the Honours course. The biggest limitation was nonetheless the fact that English is my second language and writing a 100-page thesis was a challenge. However, I did believe that I was bigger than my problem and paths to my goal would unfold if I persevered,” Arvin said.

“It's been a memorable journey to get to this point and couldn't have done it without support from some people, and yet, I am still continuously learning,” he said.

Students gathered at Monash’s Caulfield Campus to celebrate with friends, family and academic staff including the Dean of the Faculty of Information Technology, Professor Jon Whittle.

Professor Jon Whittle said the Cliff Bellamy Awards were an opportunity for staff to recognise some of the Faculty’s outstanding students highlighting their academic achievements over the past year.

“Our teaching staff at Monash understand they have a leading role to play in shaping the future of IT. They are preparing our students for the professions of the future in a rapidly changing world, and equipping them for life,” Professor Whittle said.

“We are fortunate at Monash to have some of the top IT students in the country and around the world. The standard of the cohort is impressive. We’re not just educating students to work in IT - we are educating them to lead in IT. I congratulate all award recipients,” he said.

The award recipients include: