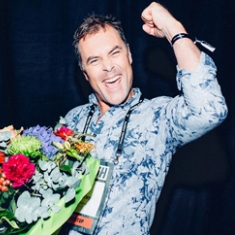 After graduating from Chisholm Institute of Technology (now Monash University) with a Bachelor of Applied Science (Computing) in 1989, I started my career in IT with Oracle as a technical consultant. However, I soon realised that I got a kick out of sales. I started the Pacific Islands Region for Oracle using old fashioned sales techniques, like placing newspaper ads and conducting seminars at major hotels to generate leads.

In the early 2000s, I was hired as the first local employee for Salesforce.com in Asia Pacific. I began as a sales executive working from my modest home office. It was an incredibly exciting time to work for such an innovative company. I was later promoted to Vice President for the ANZ region.

In 2009 I started to work for Google, but my heart was already set on starting my own business. However, I am a father of seven, and with so many mouths to feed, I had to be sure my business idea was a good one.

One day I was working from my home office and accidentally pulled out an asthma plan of my son. As a parent I was horrified that this information that contains instructions on how to save my son’s life were gathering dust in a filing cabinet. We have so many other social sharing networks, like Facebook and LinkedIn, but why is there no social care network?

I started doing something that I like to refer to as “BBQ research”, where I probed people about my idea at social gatherings like BBQ’s. I was inundated with stories from parents telling me what a struggle it is for them to fill in countless forms from schools and sporting clubs - asking for asthma plans and other medical and emergency contact details. Then I spoke to some schools and clubs and heard that it’s a nightmare for them to chase up parents for information they are legally required to collect to fulfill their duty of care obligations.

Right from the get go, I realised that I was on to something good and I started CareMonkey, an electronic health and safety system that automatically keeps an organisation’s medical and emergency database up to date. After meeting my co-founder, Martin Howell (former CTO of realestate.com.au), we were off to a flying start. The last four years were the most tiring, yet energising time of my entire career.

In November 2015, we won the largest ever prize offered at a pitching competition at Slush in Helsinki. The prize was E650,000 and we were very glad that we could gain publicity on a global stage. Unfortunately, the prize did not come as notes in a brown paper bag, but rather as an investment. My co-founder and I decided to turn down the prize, which came as quite a surprise to some!

At the 2015 Talent Unleashed Awards, Richard Branson said that CareMonkey is “certainly one to watch”. It was an incredibly rewarding experience for our team to be recognised by such a respected entrepreneur. However, it is not only the “big wins” that count. This year we’ve scaled our business, making it easier for more organisations around the world to manage their duty of care. Often, people would tell us that the CareMonkey app was a vital help during a medical emergency at their organisation - that’s what really matters.