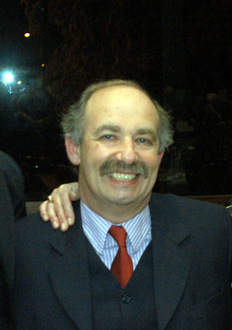 Long serving Kadimah President, Yiddish radio broadcaster and Yiddish teacher, Alex Lajzor (Leslie) Dafner was born in Lodz on 29 August 1949, the only child of Yiddish speaking parents.  Alex lived in Lodz for the first ten years of his life attending the I.L. Peretz School there, with Yiddish as a second language.  As a result of growing anti-Semitism, a worsening economic situation and the politics of the Cold War, Alex left Poland and arrived in Melbourne with his parents in 1959.

For the first year of their resettlement the family lived at the Bialystoker Centre in Robe Street St Kilda while Alex’s parents found work in the shmatte (clothing) business.  Alex attended St Kilda Primary, Elwood Central and Elwood Secondary Schools as well as completing the Sholem Aleichem Yiddish Sunday School up to year 10.  He completed tertiary and post graduate studies at La Trobe University and Melbourne University and Masters studies at Hebrew University.

Alex’s Yiddish community involvement has also included a major leadership role at the Kadimah Jewish Cultural Centre where he has served as committee member and president since 1990 and as vice president of the Holocaust Museum and Research Centre in Melbourne until 2009.  Before that he was a founding member of the Melbourne Yiddish Youth Theatre from 1970-1992 and was also the Youth Theatre representative on the Kadimah committee from 1970 till 1974.  He is currently Executive Producer of Yiddish Programs at SBS Radio and has been a presenter and producer there since 1980.   Alex is married with two daughters.