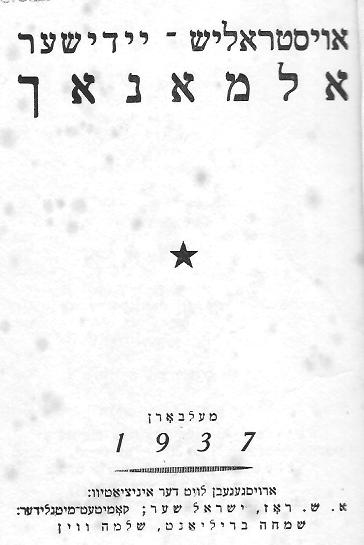 Front page of the Australian Yiddish Almanac, the first book to be published in Yiddish in Australia in 1937

The earliest Jewish immigrants to Australia brought with them the respect for writers and writing transmitted for centuries by “the people of the book”.  Many books were published in Yiddish in Australia and some authors, such as Herz Bergner, have been translated into English.  Three compendiums of Yiddish writing in Australia were published – the first Australian Jewish Almanac in 1937, the second in 1942 and the third in 1967.  These reflected the strong influence of the Australian reality on the Yiddish writers.  However, the Holocaust was the turning point for Australian Yiddish literature.  Zable (2004) makes the point that pre-war writers were able to look at Australia unencumbered with the burden of loss and displacement.

Established writers from Poland, notably Peretz Hirshbein and Melech Ravitch, visited Australia while travelling the world and wrote in Yiddish about Australian society and culture.  Hirshbein, in 1921, empathised with the World War One veterans and the Aboriginal people, both disconnected from the mainstream, both “strangers in their land.”  At the same time, he was feted as a celebrity by the Yiddish community in Melbourne.

During the 1920s Melech Ravitch journeyed from Poland to raise money for the Yiddish school system there.  He travelled throughout Australia and, like Hirshbein, saw Australia in a new light, connecting with the people of the outback, appreciating the beauty and unique character of the country.  He was inspired to write Continents and Oceans, his friendship with Pinchas Goldhar acting as a positive influence on his creative writing.

Goldhar is often cited as Australia’s most significant Yiddish writer.  His writing is seen as the transition point between pre-war Australian Yiddish writing and  the post-war era, from optimism to despair.  His short stories, based on careful observation, portray the bleak impoverished life of immigrants and his fears for the decay of the Australian Jewish community.  He felt deeply the cultural gulf, the disparity, between Eastern European culture and the Australian wilderness for the Yiddish speaking migrant.

Goldhar’s influence was especially significant on the group of younger Jewish writers whom he befriended.  They were Herz Bergner, Hirsh Munz and Judah Waten.  Bergner, Melech Ravitch’s brother, lived in Australia, but retained the world of Eastern Europe in his mind and wrote in Yiddish to address the gulf between that world and the Australian reality.  His novel, Between Sky and Sea, awarded the Gold Medal of the Australian Literature Society in 1946, remains his outstanding and memorable contribution to Australian Yiddish writing.  In 2010 it has been reprinted with a new introduction written by Arnold Zable.

Judah Waten also wrote about the Jews as immigrants to Australia.  He, however, wrote in English and has become one of Australia’s most prolific and best known Jewish authors. His first book, Alien Son, is considered an Australian classic. 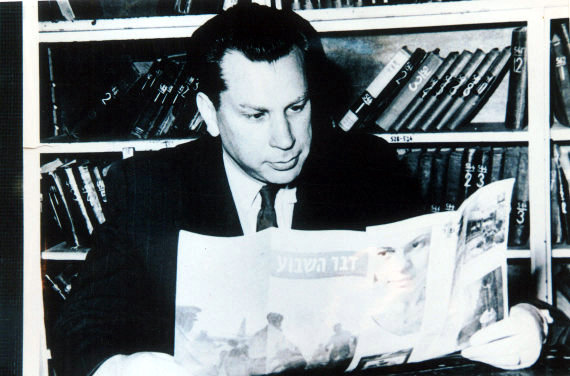 Another writer who bridged the gap between the old world and the new was Yitzchak Kahn whose 1976 publication, Chats with Australian Writers, highlighted the similarities between authors such as Patrick White and Henry Lawson and the great Yiddish writers.  His commitment to bringing English Australian writings to the Yiddish speaking community differentiated him from other Yiddish writers.  He was a regular speaker at communal functions, and wrote essays and theatre reviews for the Yiddish press.

Writer, painter, journalist and critic, Gedaliah Shaiak, helped immortalise the Yiddish writers resident in Australia by writing about them in the columns of the Yiddishe Post and the Melbourne Chronicle. Prior to, and even after his arrival in Australia in 1949, Shaiak travelled extensively throughout the world and in spite of the horrors and personal impact  of World War Two, wrote poetry, short stories, plays, novels and history with enthusiasm and in a lively style.  An editor of the Yiddishe Post his columns reflected the Melbourne literary scene and the writers, poets and essayists who were part of that milieu.

When Shaiak wrote about Yehoshua Rapaport in the Melbourne Chronicle (June 1982), he reviewed “the controversial Yehoshua Rapaport.”  Rapaport was a well-known figure, admired and criticised by his peers.  He was sharply critical and spoke his mind in his writing for the Yiddishe Nayes – he was a gifted, sharp and interesting writer.

Born in Bialystock, he spent the war years in Shanghai and arrived in Melbourne with his wife and son in 1947.  His work with the Yiddishe Nayes raised the standard of contemporary local journalism through his insistence on clear expression and correct grammar.  An intellectual giant, he was an authority on religious matters, literature and public affairs.  He was a prolific writer of articles, essays and books as well as an erudite and persuasive speaker.

Rapaport’s books included Glimmering Nights in the Mist in which he criticises European literature because it has “barely reacted to the Jewish tragedy….shows the moral bankruptcy of the world, its atrophy and decay….'” Throughout his post-war years in Australia, Rapaport felt bitterly superfluous, unable to support his family, not able to settle peacefully as a Yiddish writer.

Moshe Ajzenbud’s contribution to Melbourne’s Yiddish literary scene goes far beyond the stories, articles and books he has written.  He was the founding editor of the Melbourne Bleter – The Melbourne Chronicle, and kept it going for many years.  Additionally, he was involved in both the Kadimah and the Bund and taught and served as headmaster of the Sholem Aleichem Sunday School.

Arriving in Melbourne in 1950, he worked as a fitter and turner and also contributed regularly to the Yiddishe Post.  Through his keen observation skills, his books and articles reflect the concerns of ordinary people.  The characters in his writing span the time he spent in his birthplace, Nievizk Belorussia, from his schooling in Minsk, and detention during World War Two in deepest Russia, to the Australian scene.  His clear, gentle, nostalgic stories reflect his insight, his disappointment in the communist regime and his modified ideologies as lived in an Australian context.

Lew Frydman was another writer involved in the Kadimah:  an editor of the Yiddishe Post in 1948 -1949, and a significant contributor to the Yiddish community in Melbourne, Frydman edited the third Australian Jewish Almanac in 1967.   In addition he lectured and wrote.  His play, Madame Adler, was staged twice by the David Herman Theatre Group at the Kadimah, with Rachel Holzer in the starring role. Apart from his creative writing, Frydman wrote scholarly articles about ethnic dramatic writing in Australia and the contribution of Yiddish writers to Australian culture.

The small community of Yiddish writers formed a Yiddish Writers Union associated with the Kadimah after the war and although the first Yiddish book was published in 1937, it wasn’t until after the war that widespread literary activity emerged and books of fiction, poetry and literary criticism were published.  Bill Rubinstein (1991) notes that some sixty-four books of fiction, essays and autobiography were published between 1934 and 1982, about forty of them after 1950.  This “awakening period” included outstanding and gifted poets who wrote in Yiddish.  These included Yosel Birstein, Abraham Cykiert, Jacob Rosenberg, and I.M. Lewin, who enriched the Melbourne Yiddish literary scene with their powerful poetry.