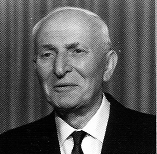 Renowned Yiddish teacher, scholar and orator, Joseph Giligich was born in Zhitomir in the Ukraine in 1891.  The son of a Rosh Yeshivah, he completed his education at the acclaimed Vilna Teachers College.  His first teaching position was in a Russian Government Jewish school in Berdichev.  As the formal teaching of Yiddish was forbidden in Russian Government schools, he was forced to teach it in secret.  When some liberalisation occurred at the beginning of the Russian Revolution, he was allowed to teach the entire curriculum in Yiddish.  He also became the school principal.

Within a few years Joseph was forced to flee Berdichev for political reasons.  He returned to Vilna where he established a Yiddish primary school and became its principal.  He also taught evening classes, lectured at the teachers’ college and became a secondary school teacher.  During this time he became the leader of the local teachers’ union.

Giligich was invited to Riga to establish pedagogic courses at the government Yiddish school.  There he also taught evening classes and shortly afterwards became Chairman of the Teachers’ Union.  The fascist coup d’etat led by Karlis Ulmanis and his conservative nationalist Peasants’ Union Party in Latvia in May 1934, saw a government crackdown on union leaders and minority groups.  As a result Giligich lost his position.

Four years later he was sent by the Central Committee of Yiddish Schools in Poland to Australia to raise funds for their secular Yiddish schools and for the Medem Sanatorium, an institution established in 1926 in Miedzeszyn, (near Warsaw) to care for children with tuberculosis – it also provided health care and education for other children and was named in honour of Vladimir Medem, a Bundist leader.  Between 1925 and 1939 the institution cared for more than 10,000 children.

It was during his successful fundraising tour of Melbourne that he was offered the position of Principal of the I.L. Peretz Yiddish Sunday School.  When he took up his position in 1938 there were thirty-eight students enrolled. Under his leadership this eventually grew to 250 students, including a kindergarten.  He remained its principal until 1970.  He also founded the Sholem Aleichem Sunday School in 1946 with his son-in-law, Yasha Sher, serving as its first principal.

Giligich was also active in the Kadimah and soon joined its committee.  He established the “Folk University” a Wednesday evening adult education class that began with readings in Yiddish literature.  He became a regular and popular presenter at Sunday lectures at the Kadimah.  He was a staunch supporter of Jewish Welfare and during the 1940s and 1950s was often called upon to give an address in Yiddish at their fundraising functions.

Joseph Giligich married Klara Badanas in Vilna in 1913.  They had a daughter and a son, four grandchildren and seven great grandchildren. He died in 1977 at the age of 86.  To honour his contribution to Yiddish education his past pupils, co-workers and friends created the Joseph Giligich Foundation at the Kadimah.  Its main objective was to establish a Yiddish library at both Melbourne and Monash universities and to send Yiddish books to Jewish communities wherever they are needed.