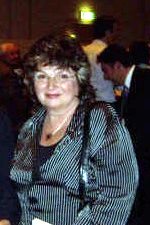 Chairperson of the Giligich Foundation and Honorary Curator of the Kadimah Library, Rachel Kalman (nee Borenstein), was born in Siberia in 1940.  She survived the war with her mother but her father died in 1945.  Following liberation she accompanied her mother briefly to Warsaw before moving on to Lodz where she stayed for two years and attended a Yiddish preschool.  From there they travelled to Paris where Rachel attended a French school for two years.  However in 1949 they decided to leave Europe and made their way to Italy where they boarded a boat bound for Australia, the first country to offer them visas.  They arrived on 9 September 1949.

While Rachel attended Princess Hill primary school she also attended the I.L. Peretz Yiddish School on Wednesday afternoons and Sundays.  She continued on to University High School and then studied physiotherapy at Fairfield.  Even while practising as a physiotherapist, Rachel’s commitment to Yiddish culture and education has been central to her life.  She was a teacher of Yiddish at the I.L. Peretz School and a SKIF helfer (youth leader) for over five years.  She organised social functions for SKIF and the I.L. Peretz School.

In 1994 Rachel was elected to the Board of Management at the Kadimah, charged with the responsibility of looking after the library and archive collections.  She took on this role with immense energy and commitment and has been honorary curator of the library since then.  Together with a group of dedicated volunteers she has overseen major initiatives at the Kadimah library:  collecting, cataloguing, storing and facilitating the use of Yiddish books and valuable documents for the community.  She is also currently Chairperson of the Giligich Foundation which has, amongst other initiatives, established libraries of Yiddish literature at both Melbourne and Monash Universities.