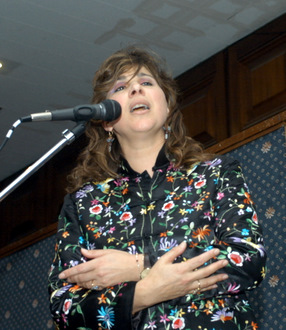 Best known as a popular Yiddish singer, Freydi Mrocki was born in Melbourne on 14 June 1960, one of three children of Chana, a Yiddish teacher at the Sholem Aleichem Yiddish Sunday School and Morris (Moishe) Mrocki.  As a child Freydi attended the Sholem Aleichem Kindergarten and Sunday school.  She completed her tertiary education at Monash University and Melbourne Teachers College gaining a Diploma in Education (primary).

From an early age Freydi took to the stage, performing in Yiddish at SKIF, Bund, Kadimah and Yiddish school ceremonies.  She attended SKIF and later became a helfer (youth leader) charged with the teaching of Yiddish at its camps.  Her teaching career saw her return to the Sholem Aleichem Sunday School as a teacher and then in the 1980s to Sholem Aleichem College as a Yiddish teacher for a number of years.  There she also took on the role of Kindergarten Head of Yiddish and Jewish Studies.  From 1999 to 2008 she taught secondary school Yiddish at Mount Scopus College to years 8, 9 and 10 and she was part of the committee that obtained VCE accreditation for Yiddish in 2004.

In addition to her teaching and music commitments, Freydi was an educator on March of the Living in 2007, has helped co-ordinate Yom Hashoah commemorations and is a committee member on the Pnina Zylberman Yiddish Cultural Trust.  The foundation was created by the Zylberman family to commemorate the life of their late daughter and sister Pnina, as a way of supporting Yiddish language and culture.

Freydi also serves on the committee that organizes Yiddish Sof Vok, an annual residential weekend in Melbourne where only Yiddish is spoken and cultural activities are organised.  She has also been a vocal coach in Yiddish pronunciation for singers such as Kate Cerebrano and the Melbourne Chorale.  Freydi has sung in three films: Bitter Herbs and Honey, a film by Monique Schwartz, A Saucer of Water for the Birds, an animation by Anne Shenfield and From Ash to Metaphor, a video by artist Heather Ellyard’s exhibition.