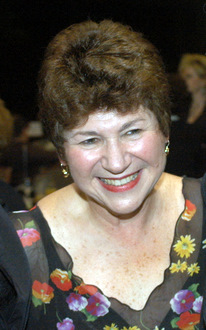 Yiddish teacher, translator, broadcaster and community figure, Danielle Charak, (nee Gryfenberg), the younger daughter of Yiddishists Nachman and Rywka Gryfenberg, was born in January 1939 in Brussels.  When war came to Brussels and it was no longer safe for Jews to live openly, Danielle was put into the care of a non Jewish family in January 1943.  She remained with them until Brussels was liberated in 1944.  From there she was reunited with her parents and older sister Floris, all of whom had also survived in hiding.

In May 1949 the Gryfenberg family arrived in Melbourne and Danielle commenced her Australian education at Graham Street Primary School.  She then went on to Middle Park Central.  At the same time Danielle was attending Yiddish school and began to go to SKIF, being one of the first five members of SKIF whom Pinye Ringelblum brought together.  Danielle later went on to be a youth leader at SKIF.  It was her Yiddish school and SKIF experiences which helped give Danielle a sense of belonging and contributed to her enduring commitment to Yiddish education.

At nineteen years of age Danielle began teaching Yiddish at the Sholem Aleichem Yiddish Sunday School.  She also completed a BA at the University of Melbourne (Hons in French).  In the following year she completed a Trained Secondary Teachers  Certificate.  She taught English to migrants and French up to matriculation at Portland High School.  In 1961 she went overseas and taught English to migrants in Israel.

On her return to Australia she taught Yiddish at Prahran College of Advanced Education in the Department for Jewish Studies under the leadership of Henry Shaw.  She later taught French, Jewish History, Jewish Values and Yiddish at Mount Scopus College.  She spent four years as Executive Director of the Australian Institute for Jewish Affairs and the Executive Council of Australian Jewry, followed by ten years in Yiddish radio, broadcasting on 3EA, later renamed SBS Radio.  She has been employed at Monash University to teach tertiary Yiddish and is currently Chair of Panel in setting the VCE Yiddish examination and is its chief examiner.

As well as being a teacher of Yiddish for over fifty years, Danielle has found time to be a Yiddish speaker at countless community functions and events.  These involved commemorative as well as celebratory evenings with readings, music and songs.  Danielle has also recorded books in Yiddish for ageing, vision impaired members of the community and acted as a translator of many private letters and articles.  She was also instrumental in fundraising for the teaching of Yiddish at Monash University and in 2004 headed the small team that  raised funds to secure a Yiddish lectureship.

Danielle married Isi Charak in 1962.  They are the parents of three children and the grandparents of twelve grandchildren.