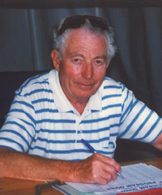 Everyone went to the movies every Saturday evening.  On Sunday evenings we would all, about 20 of us, meet in a home.  We would eat and drink and have heated discussions.  Leah, my wife, would join in.  Few of the other wives had those interests.  The discussions were about Israel, about politics, about the world.  Even within the Bund there were different opinions, different factions, different views.

Some 500 people came to the AGM at the Kadimah in 1950.  They didn’t let me in because I wasn’t a member.  I had arrived in September 1950.  At the Kadimah there were Right wingers, Left wingers, Mizrachi members, Zionists, Bundists.  Those were the “hot days” of political discussions that went on half the night.  Among the leaders there was Honig (the Revisionist), Patkin, Solvey, Burstin, Riener, all fine people.  We had very little to do with the people who had settled here prior to the war.

After 60 years in Melbourne, when I think back, I recall that the Yiddish community was bound as one.  Now the character of the community has changed.  The discussion, the dynamic, the interwoven character and the intense “life” of the community no longer exists.