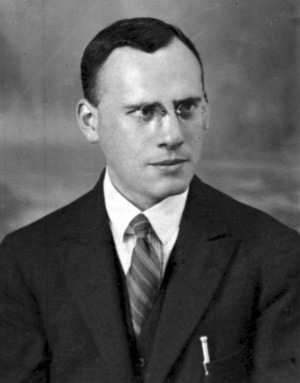 Celebrated Yiddish writer Pinchas Goldhar, was born in Lodz on 14 June 1901.  He was the eldest of four siblings and son of Jacob Goldhar, a dyer and his wife Rachael, nee Hirshkowitz.  Following a Jewish high school education and university studies, by 1922 Pinchas was working for the daily Lodz Yiddish newspaperLodzer Tageblatt (The Lodz Daily).  During this period Yiddish literature was experiencing something of a renaissance in Poland and Pinchas Goldhar quickly established his reputation as a Yiddish writer of note.  He translated a number of French and German novels and stories into Yiddish, one of which, The Weavers, by German dramatist Gerhart Hauptmann, became a favourite on the Yiddish stage.

In order to escape an increasingly oppressive anti-Semitic Poland and because of family connections in Melbourne, recently widowed Jacob Goldhar and his children set sail for Australia.  By 1928 the family was settled and Jacob Goldhar set up a small family dyeing business in Carlton, a business that Pinchas initially joined.

On 16 January 1931 Pinchas became the inaugural editor, for a period of about three years, of the first Yiddish newspaper in Australia, Australier Leben (Australian Life), produced at the time by printer and stationer David Altshul.  In 1937 Pinchas collaborated with and contributed to the first Yiddish book to be published here, the Australian Jewish Almanac and in 1939 issued Stories from Australia the second Yiddish book.  It attracted worldwide reviews, notably a favourable critique from I. Bashevis Singer. Some of the stories in the collection were translated into English.

Pinchas was impressed with the quality of Australian literature and by 1944 he’d translated into Yiddish and published here and abroad, many stories by Henry Lawson, Katherine Susannah Pritchard, Frank Dalby Davison, Alan Marshall and Vance Palmer.  His essay on Australian literature was translated by Nita Bluthal and Stephen Murray-Smith and published in Melbourne University Magazine in 1947.  Throughout his relatively short life Pinchas cultivated a wide circle of literary and artistic friends both Jewish and non-Jewish.

Pinchas Goldhar married Ida Shlezynger in 1934 and had three children.  He died of a coronary thrombosis on 25 January 1947.