Inter-war European Jewish immigrants to Australia were anxious that their children study Yiddish language and culture.

On 1 October 1935, a group of Yiddish enthusiasts met to establish the first Yiddish school in Melbourne – a Sunday and afternoon school, later known as the I.L. Peretz School.  Their intention was that the school would teach Yiddish language both spoken and written, Yiddish literature, and an introduction to Jewish history.  It was intended that the school would be apolitical. Melech Ravitch was the first principal and the school opened in the Kadimah building, with thirty students enrolled. 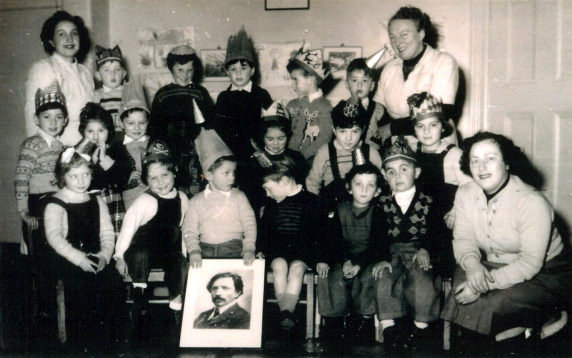 In 1938 Joseph Giligich took over as principal and remained there for the next thirty years, having an enormous impact on Yiddish education and culture in Melbourne.  It was his passion and dedication, as well as his skill as an educator that grew the school.  In 1941 additional premises were purchased at 1008 Drummond Street Carlton for the 140 students spread over eight classes.  Post war immigrants, who almost all spoke Yiddish in their homes, sent their children to the I.L. Peretz Yiddish School on Sunday mornings and Wednesday afternoons.

Because of the increased enrolments, in 1947 Giligich initiated a two-year teacher training course for Yiddish language teachers, to supplement the teachers trained in Europe.  This was conducted from 6 to 8pm one evening a week and Sunday morning classes were included for practical experience.

As the school continued to expand, a kindergarten was opened in 1950 and Cluwa Krystal became the director, bringing  to the position her valuable Eastern European experience.  In 1956 a new school building was opened to accommodate burgeoning numbers.  This was set up at 885 Drummond Street Carlton on land given by the Australian Jewish Welfare Society.  With 262 students, the school reached a new zenith in 1961. Celebrating the opening of the Sholem Aleichem College, article in Australian Jewish News 16 May 1975

As the Jewish population grew in the area south of the Yarra River, the need arose to establish another Yiddish school.  Parents found it difficult travelling to Carlton on the weekends and after school on Wednesdays, in order for their children to learn Yiddish.  Thus, the Sholem Aleichem School was established in St Kilda and Yasha Sher, Joseph Giligich’s son-in-law, became the first principal from 1946. In 1953 a kindergarten was established in a newly acquired property in Elsternwick.  Genia Wasserman, trained in Eastern Europe, was appointed as the director and under her guidance the kindergarten flourished.  By 1960 there were over 200 students spread across eleven classes at the Sholem Aleichem School.

The I.L. Peretz School and the Sholem Aleichem School taught the same curriculum.  In the early years, most students spoke the Yiddish they heard in their homes and the school taught them to read and write in Yiddish.  The younger classes learnt through games and song and through the retelling of Bible stories and Jewish history in Yiddish.  Older students studied Yiddish literature from the original texts as well as the ethics of Judaism.  Many past students comment on the enjoyable, educational Yiddish song sessions held at every level of the school  – they absorbed Yiddish culture through these sessions.

In spite of the fact that fewer students spoke Yiddish at home by the 1960s, students graduated from the schools with the ability to read, write and speak Yiddish.  In addition to strong language skills, the school nurtured the students’ Jewish identity and provided a sense of community. Opening of the I.L. Peretz School at 885 Drummond Street Carlton, 1956

Clear and beloved memories of the schools include the cultural events celebrated each year.  There were those tied to the Jewish festivals and commemorations, the driter seyder (the third seder), the Purim parades, Warsaw Ghetto commemorations, as well as the concerts, and plays based on the work of Yiddish writers.  The school choir was active both within and outside the Yiddish communities – cutting gramophone records, singing on radio and appearing at communal functions.  Their repertoire included Yiddish folk songs:  songs form the ghettos of Europe, the Partisan’s hymn and school songs.

But as the community increasingly moved to the suburbs south of the Yarra River, student numbers at the I.L. Peretz School declined dramatically, until there were only seventy students attending in 1970.  In 1970 Joseph Giligich retired and in 1972 a junior school was opened in Balwyn, to cater for families who had moved to the Eastern suburbs.  The senior school moved to Balwyn the following year and in 1977 a new school building was opened. Despite all this enrolments fell from year to year and in 1984 the I.L. Peretz School and Kindergarten was absorbed into the Sholem Aleichem School.

In the context of the growing Jewish day school movement and the fact that few students acquired mame loshen in their homes, it is not surprising that the part-time schools became less attractive to parents seeking a Jewish education for their children.  In an attempt to maintain the viability of Yiddish, the response to these issues was to establish the Sholem Aleichem College, a Yiddish day school.

In 1974 Nachman Gryfenberg and a group of committed co-workers set about establishing a day school that would promote Yiddish language and Yiddish culture and ensure that Yiddish education would be permanently accessible in Melbourne.  The school would provide a secular liberal and general education including Yiddish, Hebrew, Jewish history, literature and ethics.  There were ten students when it opened in February 1975, but it grew and in 2010 there are ninety students in the kindergarten and 113 students in the school.

Bursaries are available to support potential Yiddish teachers through the Penina Zylberman Yiddish Cultural Trust.  Since 1994 this fund has sought to foster the preservation and promotion of the Yiddish language and the associated Yiddish culture, music, theatre, literature and poetry.