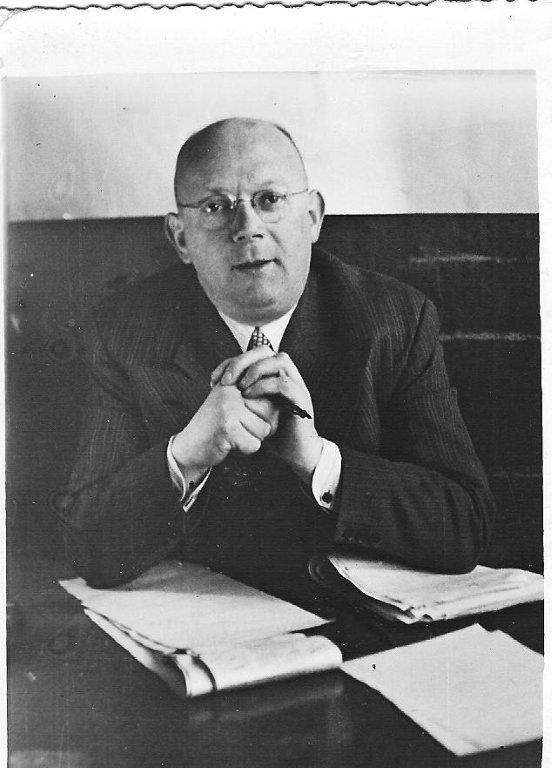 Tireless community worker and Yiddish journalist, David Meyer Abzac was born on 4 September 1901 in Warsaw. The youngest of four siblings and the only son of Moshe Aron and Ruchle, David received a traditional Cheder education. When his father died at the age of 39, his mother was forced to support the family by selling clothing as an itinerant saleswoman. Although the family were financially impoverished, they were rich in Yiddishkeit and it was these values that left an indelible mark on David’s life. In his youth, David was involved with a Maccabi sports club in Warsaw. It was during this time that he became involved in and supported the right wing Revisionist Zionist movement, an involvement that remained with him for the rest of his life. In 1919 he was drafted into the Polish army. He served with distinction and from then onwards wore their insignia on his coat lapel.

In 1928 David married Eugenia (Golda) Brandszaft. Their first child died in infancy. Their second child, a daughter named Masha (Mary), was born in 1935. As conditions in Poland deteriorated and with the impending threat of war, David and Eugenia decided to immigrate to Australia. David’s mother and three sisters, Pola Lederman, Chana Nagel and Fela Acker, were already living in Australia. David’s brother-in-law Jack Lederman sponsored their visa and guaranteed work and accommodation. The family arrived in Australia on 11 March 1939 on board the Orion. For the first few weeks, they lived with the Lederman family before securing their own lodgings in Carlton. In order to earn a living, David became a market stallholder, selling women’s clothing at the South Melbourne and Dandenong markets.

David’s skill as a Yiddish writer and his love of the Yiddish language and Yiddish culture were reflected in the weekly column he wrote for the Yiddishe Nayes. It was here that he commented on local and international politics, Yiddish theatre, the Kadimah, local affairs and the situation in Europe. His articles reflected the mood of the times and captured the concerns of the community. David also loved Yiddish music and acquired a great knowledge of liturgical music. He wrote well-informed critiques of the chazanim in the shuls on the Yomim Tovim. He would walk from Talmud Torah Hascola to Stone’s shtibl (room) to the Carlton, East Melbourne and Toorak synagogues, to hear them all. David also wrote music and sang Yiddish songs, being gifted with a beautiful tenor voice. He often gave recitals at the Samuel Myers Hall on numerous Oneg Shabbatim, where there were often some 300 people gathered.

David’s commitment to the Jewish community and his belief in the importance of helping others saw him become deeply involved with, and an integral part of, the United Jewish Overseas Relief Fund in 1943-45 as a Board member, and Jewish Welfare from 1946-1950 as Honorary Secretary and Chairman of the Migration Assistance Committee from mid-1948. He took personal responsibility for meeting new immigrants at their port of arrival. This meant that he travelled to Sydney in 1947 to meet the Ville d’Amiens and in 1948 travelled to Fremantle to meet the Derna, which carried some 60 Jewish orphans for resettlement in Melbourne. Together with Charles Slonim, he travelled with them on board the boat to Melbourne, offering guidance, reassurance and assistance. On many occasions David, in the company of Hans Fischer, would meet those arriving in Melbourne at Port Phillip Heads by going out in the pilot boat. In addition he, together with Mina Fink, orchestrated a program of entertainment and a formal reception for the new arrivals and, when appropriate, attendance at Shabbat services. His daughter recalls that “his time was never his own, he spent countless hours counselling ‘newcomers’ on jobs, filling in applications and finding schools and accommodation.” In recognition of his untiring and selfless work, a migrant hostel was posthumously named in his honour in May 1951, The David Abzac House for Refugees at 912 Drummond Street Carlton.

His commitment to the establishment of an independent Jewish homeland saw him continue his support of the Zionist Revisionist party in Melbourne together with Yehuda Honig, Sigmund Stock, Kalman Parasol, Dr Gold and Jonas Pushett. He also co-founded the Zionist school Bialik College, in Drummond Street Carlton in 1942. A plaque bearing his name still hangs in the corridors of the College, now located in East Hawthorn.