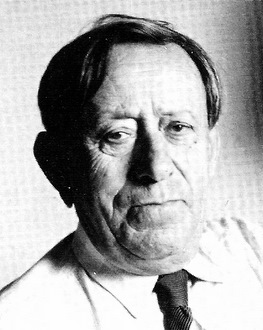 A man of great vision and an indomitable spirit, Melbourne Holocaust Museum co-founder and inaugural co-president, Aron Sokolowicz was born into a staunch Zionist family in Bialystok in 1911.  From an early age he became committed to the ideals of Zionism.  Son of a vinegar manufacturer, Aron lost his mother while still young and was the eldest son of nine siblings.  In Bialystok he received a traditional religious education in a Cheder and a Yeshivah and from an early age became imbued with a strong sense Yiddishkeit.

By the time the war reached Bialystok Aron was married with a young son.  Together with his family Aron was incarcerated in the Bialystok ghetto and remained there until their deportation to Auschwitz in 1942.  On 18 January 1945 after the liquidation of Auschwitz, Aron was transported to Ebensee, in Austria, where a few months later he was liberated by the Americans.  Aron was the sole survivor of Auschwitz.

Following liberation Aron, together with several thousand other Displaced Persons, was relocated in the south of Italy in Santa Maria de Bagni where he remained until 1948.  It was there that he met and married his second wife Cyla in late 1945.

With the establishment of a Jewish homeland in 1948, Aron decided to settle in the State of Israel.  He lived there until 1956.  But life in the newly established State of Israel was extremely difficult and with his wife Cyla and two daughters, Nuritt and Mooky, he made the decision to immigrate to Australia.  The family arrived in Melbourne in 1957.  Although resettling in Australia was difficult at first, Aron and his wife managed to become financially independent and make a new life for themselves and their children.

Aron became very active in a number of Jewish organisations, the Bialystoker Landsmanschaft, the State Zionist Council where he was Chairman of Yiddish Culture and the Federation of Polish Jews.  He was also a supporter of Poale Zion.  As a Yiddishist, Aron often contributed to the Yiddish section of The Australian Jewish News and in 1964 became Chief Editor and Administrator of Der Landsman, the Yiddish journal of the Federation of Polish Jews in Australia.  This journal continued for many years.

Aron’s consuming passion to tell the story of the Holocaust never left him and every year he would organise an exhibition of Holocaust photos at Beth Weizman to accompany the Warsaw Ghetto Commemoration, the precursor to Yom Hashoah.  His enduring legacy to the Jewish community was the establishment of the Holocaust Museum and Research Centre in Melbourne in 1984.  Its creation and its mission was the fulfilment of Aron’s vision; that the message of the Holocaust would never be forgotten.

Aron Sokolowicz passed away in Melbourne in 1991.