*Updates thanks to Anna Epstein

One of the greatest Yiddish writers of the twentieth century, poet,  essayist, playwright and cultural activist, Melech Ravitch (pseudonym of  Zekharye-Khone Bergner) was born in Radymno, eastern Galicia in 1893.  He  received a general secular education with a limited traditional Jewish  education.  By the age of fourteen, he left home to begin a life of travel  that would take him to the four corners of the earth.  By 1910 he began  writing in Yiddish, his initial pieces appeared in Galician publications.   As a young man, he lived in Lemberg and Vienna.  At the outbreak of the  First World War, he was drafted into the Austrian army and wounded at the front. 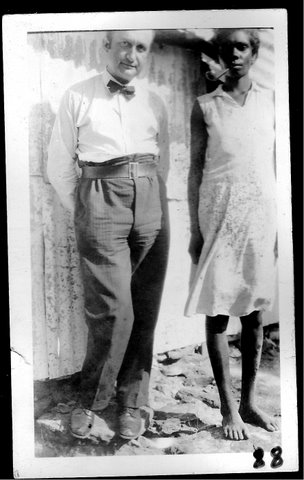 Melech Ravitch with a young Aboriginal woman in the outback

By 1921 he had moved to Warsaw where he was strongly influenced by the writers Peretz Markish and Uri Zvi Greenberg.  The three writers were at the vanguard of Yiddish expressionist literature that struggled against realism.  In 1929 his expressionist poetry was published in Di fir Zaytn fun mayn Velt (“The Four Sides of my World”). During his period in Warsaw, Ravitch also edited the journal Di Vog (The Scale) and also printed pamphlets against the opponents of modern Yiddish poetry, including Dovid Eynhorn and Hillel Zeitlin.  Between 1924 and 1933, Ravitch served as executive secretary of the Fareyn fun Yidishe Literatn un Zhurnalistn in Varshe (Association of Jewish Writers and Journalists in Warsaw) where he was at the centre of Yiddish literary life in Warsaw.

After witnessing the rise of Hitler and anti-Semitism, Ravitch persuaded a group of Jewish businessmen and intellectuals to send him to Australia in search of a site for a Jewish homeland. In fact, “the author Melekh Ravitch came to Australia…. sent here by the Central Jewish School Organisation (“TSYSHO”), in order to carry out a fund‐raising campaign for the Yiddish secular day‐schools in Poland.” From this evidence in the Almanac, and in Sender Burstin’s accounts, Ravitsh was following his wanderlust and got the Bundist TSYSHO schools to send him on a fundraising mission to Australia, where entirely on his own initiative, he intended to travel to look for a homeland for the Jews. He never mentioned the Kimberley, never went there. He seems not to have heard of the Kimberley. He got as far as Darwin and never tried to go further west.  In 1933 Ravitch left Poland for Australia where he would explore the possibility of a Jewish settlement in what seemed to him the furthest and safest place in the world - the Kimberley region in Western Australia.  With official permission from the Australian federal government, a letter from Einstein There’s no evidence for either of these claims. and a Kodak camera, Ravitch accompanied by a young Aboriginal assistant The assistant was to the Italian mailman, whose truck Ravitsh had commandeered to take him to Birdum, and not to Ravitsh. and an Italian truck driver, slowly and laboriously travelled across the desert to the Kimberley and back again. The slow laborious trip was the 800 miles of unmade road from Alice Springs to Birdum, to meet the train to Darwin. But despite further interest from the London-based Freeland League and the presence in Australia from 1939 to 1943 of its co-founder, Dr Isaac Steinberg,  the plan to establish a Jewish settlement in the “never-never” did not eventuate. Ravitch documented his journey in a diary that described his encounters with the outback.  He tells of farblondszetter camlan (lost camels), kanguru gayug (kangaroo hunting), and a naches tzu zayen vi ehr fligt mein boomerang ( the pleasure of seeing a boomerang fly).  He thought that the problems of the outback could be solved with mehr vasser, veiniker bier (more water, less beer)! 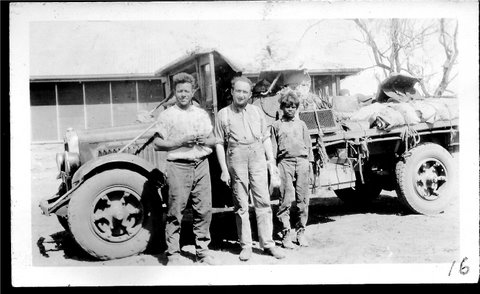 Ravitch stayed in Australia until 1938. He didn’t stay but left after his outback adventure and returned again in 1935, to save his family by bringing  them here. He left again in 1937 after his son Yosl arrived, and never  returned. in which time he was instrumental in helping to establish the  first Yiddish school in Melbourne, the I.L. Peretz school <https://www.monash.edu/arts/acjc/yiddish-melbourne/education/yiddish-schools-in-melbourne>  in 1937, also serving as its inaugural Headmaster for one  year this was in 1936, see the Almanac. Despite a fear of travelling, he  declared himself a citizen of the world and subsequently travelled to  Argentina, Mexico and New York before settling in Montreal in 1941, where he  became a catalyst for Yiddish literature, education and cultural activities.  He remained in Montreal until his death in 1976.   Melech Ravitch was married to Fanye, the mother of his children, all of whom  he left here in Melbourne without support and he was the father of painter  Yosl Bergner and the dancer Ruth Bergner. His brother, the Yiddish writer  Herz Bergner  <https://www.monash.edu/arts/acjc/yiddish-melbourne/biographies/herz-bergner>, settled in Melbourne in 1938. Ravitsh spent the rest of his life in  Montreal with the librarian Rokhl Eisenberg.