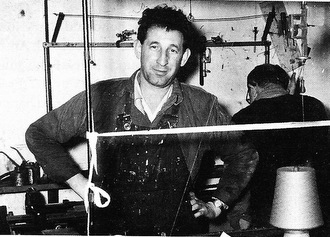 Bono Wiener as a knitter in the 1950s

Political and social activist, community leader and passionate advocate of Yiddishkeit, Symcha-Binem (Bono) Wiener was born in Lodz in 1920 to a middle class Bundist family.  From his teenage years Bono was imbued with the socialist ideals of the Bund, a concern for the underprivileged, a sense of justice and a love of the Yiddish language.  He attended the Medem Secular Jewish School and a Jewish technical school.  He was a member of SKIF, the youth organisation of the Bund.

Following the outbreak of war and German invasion, Bono and his family were incarcerated in the Lodz ghetto where he worked as a locksmith in a metal workshop.  In the ghetto he became a leader of the Bundist underground movement, listening to illegal radios and unsuccessfully trying to secure arms.  Both his parents died in the ghetto.  According to a memoir written by his lifelong companion, Yiddish writer Chava Rosenfarb, it was because of his work as a locksmith in the metal factory that Bono was designated to remain behind with a group of 800 workers when the ghetto was finally liquidated in August 1944.  However he refused to abandon his Aunt Clara and left the ghetto with her in a transport heading for Auschwitz.  His aunt was murdered shortly after their arrival.  From there he was sent on to Mauthausen and Güssen concentration camps.

At war’s end he was reunited with his only surviving family member, his brother Pintche, who had survived the war in a Russian gulag (prison camp for political prisoners) in Vorkuta.  Together they stayed in Lodz for three years where Bono tried to resurrect Jewish life and the Bund.  Realising that there was no future for Jews in Poland the brothers escaped to Germany.  Assisted by the International Refugee Organization they both migrated to Australia in 1950. 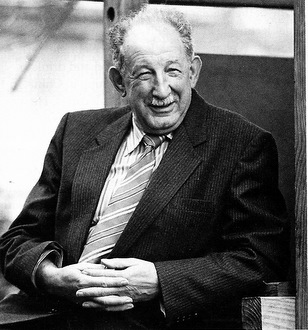 As part of the terms of their passage as displaced persons, Bono and Pintche were indentured to the Australian government which required them to work for two years as directed.  This resulted in both brothers working on the railways in South Australia.  Following the completion of his contract, Bono moved to Melbourne and subsequently worked as a knitter before establishing Astronaut Travel Agency in St Albans in 1961.  He went on to establish Jetset Tours travel agency, with Isi Leibler and Lionel Landman.

Bono’s fighting spirit and his commitment to the ideals of the Bund never left him.  Soon after his arrival in Melbourne he became involved in communal affairs, taking on leadership roles which often embroiled him in controversy.  He established and became secretary of the New Australian Council of the Victorian Labour Party in 1954.  His membership of the Australian Labour Party was, however, fraught with conflict.  The New Australian Council was abolished in 1958.  According to Bono’s close friend and ALP colleague, Barry Jones, Bono was directed to hand over all the NAC papers, many containing sensitive information involving family histories and representations for assistance.  Bono refused and was expelled without further notice from the Victorian ALP in 1960.  He was reinstated in 1970 but only through federal intervention.

Bono’s commitment to the Jewish community was unequivocal.  He was secretary of the Jewish Labour Bund in Melbourne from 1954-1958 and later became its president.  He was also a member of the co-ordinating Committee of the Bund in New York.  From 1960-1990 he was a member of the Governing Board of Jewish Welfare in Melbourne.  He was president of the Kadimah Cultural Centre in 1978 and co-founded the Holocaust Museum and Research Centre in 1984, becoming its first co-president in that year.

Bono also guided and financially supported the establishment of the Sholem Aleichem School in 1975.  In addition he was committed to the Jewish Secular Humanist Society.  He was an inaugural committee member of the Lodzer Landsmanschaft when it convened its first Annual General Meeting on 21 September 1953 and over the years maintained strong links with others who came from Lodz.  As part of his love of the Jewish people, Bono maintained strong ties and a commitment to the State of Israel.

He died in Montreal in 1995 while on a visit to Chava Rosenfarb.