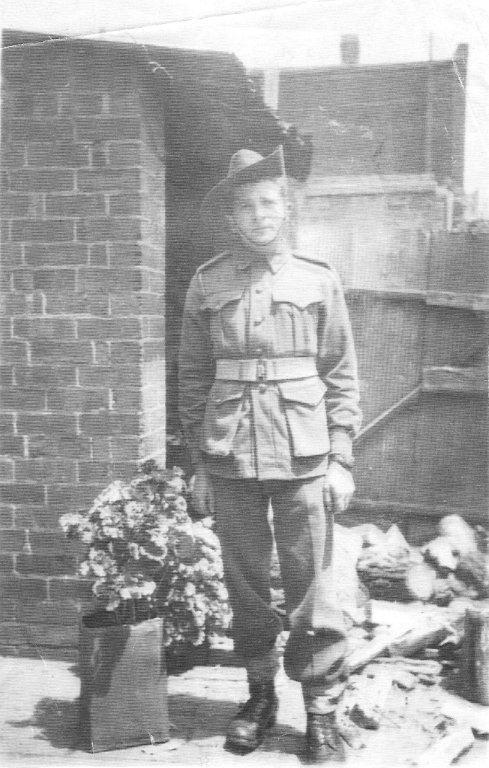 Yiddish journalist and writer, Shmuel Itzhak Bennett, was born in Radom on 27 July 1919, the son of Moshe Benet, an orthodox Kashrut supervisor and his devout wife, Feyge Rochel. Even though Shmuel left school at the age of fourteen to work as a printer he continued to educate himself about Jewish religious matters and retained a lifelong commitment to Yiddishkeit and religious life.

After Shmuel’s father went to England to supervise kashrut, the family petitioned King George VI in order to obtain a visa to leave Poland and live in one of the Commonwealth countries. According to Shmuel‘s recollections in his autobiography, within two weeks of sending the letter to Buckingham Palace, a reply was received from the Home Office instructing the family to present their documentation and proof of financial independence to the embassy in Warsaw. With assistance from the JOINT and HIAS the family left Poland for England where they obtained landing permits and a visa for Australia.

The family arrived in Australia on the Otranto on 11 April 1939 and quickly settled into Carlton life, opening a kosher restaurant and boarding house for single orthodox males. Shmuel worked in this business and also began his own printing works.

With the outbreak of war Shmuel’s fortunes changed. After the Japanese attacked Darwin on 19 February 1942, Shmuel enlisted in the army and was posted to an army unit on the border of Victoria and New South Wales where he was involved in transferring military and other freight between the two states, as the train lines operated on different railway gauges. In his off duty time he enrolled in a correspondence course run by the author Alan Marshall. Shmuel developed an interest in journalism and writing as well as an enduring admiration and friendship with Marshall.

Following his discharge from the army in 1944, Shmuel married Clara Feiglin in 1945 and they had two daughters, Judith and Helen. As a printer Shmuel began working on the Yiddish section of The Australian Jewish News and at the same time contributed articles to the paper.

Shmuel’s skill as a Yiddish journalist was quickly recognized. His popular community column Shvartz oyf Wajs (Black on White) was a regular feature of The Australian Jewish News for some  thirty years. It was during this period that he became a prolific Yiddish writer for overseas Yiddish newspapers and journals contributing articles to The Forward in New York, Der Keneder Odler (Canadian Jewish Eagle) in Montreal, the Letzte Nayes (The Latest News) in Tel Aviv and Dos Yiddishe Vort (The Yiddish Word) in Warsaw, to name but a few.  In addition Shmuel was a broadcaster on SBS Yiddish radio.

He was a committee member of the Caulfield Synagogue, the Radomer Landsmanschaft and a volunteer at the Jewish Museum and the Holocaust Museum. He also gave talks at the Montefiore Homes.

Shmuel Bennett passed away in Melbourne in 2008.