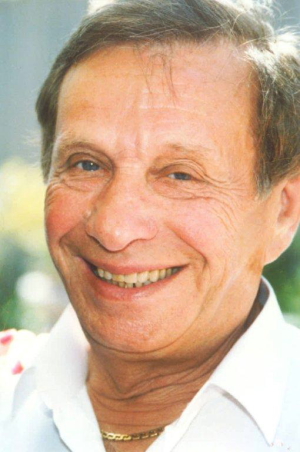 Yiddish actor and impresario, Shmuel (Sam) Migdalek was born in Radom Poland in 1924.  The son of Abraham Jacob, a religious studies teacher and Miriam, a haberdasher, Shmuel was one of five siblings.  He attended Cheder and started working as an apprentice in a paint shop at the age of twelve. But from an early age Shmuel enjoyed performing, acting and singing.  His first paid performance as a singer was in his family’s synagogue.  To the great consternation of his father however, and while still a child, he joined the Ben Zion Witler Travelling Acting Company, a group of itinerant Yiddish actors.

When Germany invaded Poland, Shmuel became trapped in Radom.  After surviving the Radom ghetto and a nearby labour camp, Shmuel was deported to Auschwitz in July 1944 where he was selected for labour.  He was sent to Vajhingen Concentration Camp in Germany and finally to Dachau where he was liberated by the Americans.

Soon after liberation Shmuel was again performing for his peers, taking on acting roles in performances at the Feldafing DP camp.  In 1946 he met and married Silvia Andacht, a fellow Holocaust survivor and together they decided to immigrate to Australia where Shmuel had a surviving aunt.  They arrived on 16 March 1947 aboard the Johann De Witt.

A talented character actor, Shmuel immediately joined the David Herman Theatre.  Together with John Bluthal he was given a major role in a play in 1947.  Shmuel remained an active member of the theatrical group until 1976.  He was amongst the actors who performed in a supporting role to Yiddish comedian Shimon Dzigan in a revue entitled Vu Zenen Meyne  Zibn Gute Yor? (Where are my Seven Good Years?) along with Az Men Lebt-Derlebt Men (If we Live we can Overcome) in 1975.

He performed with many notable producers:  Rachel Holzer, Jacob Waislitz, Zigmund Turkov, Ida Kaminska, and Joseph Shein.  But Shmuel also wanted to bring other performing artists to Melbourne Jewish audiences and in March 1976 he became an entrepreneur, bringing Mike Burstein to Australia. He also brought out many other performers, including Jan Pierce (1976), Moti Giladi (1976), Bernard Spears and Geula Gill (1977), Duo Reim (1977), The Zim Brothers (1980) and Dalia Dor & Mike Sadeh (1981), to name a few. He also produced several plays, including Cold Storage by Ron Ritman in 1980, I Ought to Be in Pictures by Neil Simon in 1981 and in conjunction with Aron Zaitman, Two by Ron Elisha in 1985.

Shmuel delighted in bringing Israeli artists to the attention of Melbourne Jewish audiences and imported several Israeli films some of which were based on the work of Ephraim Kishon.  In addition to his theatrical pursuits, Shmuel was a member of the Radomer Landsmanschaft and the the Shalom Chapter of B’nai B’rith for over thirty-five years, being its delegate to the Jewish Community Council of Victoria.

In his last years, Shmuel took to painting and staged an exhibition of his work in a private gallery in 1998.  Shmuel Migdalek passed way on 10 February 2003 leaving behind his wife Silvia, two daughters and grandchildren.  His niece is the celebrated portrait painter Esther Erlich.