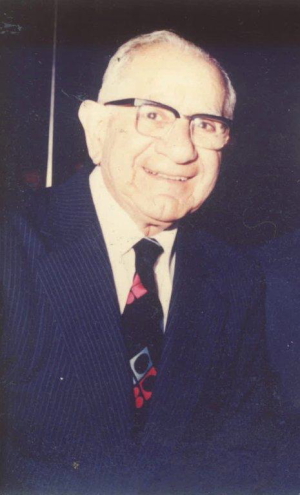 Melbourne community identity Jonas Pushett was born in Warsaw on 16 February 1898.  His father was deeply involved in the Jewish community and served as the Secretary of the Warsaw Jewish Cemetery.  Jonas’ early education was in a traditional Cheder.  He later attended night school and qualified as a bookkeeper.

Times were particularly difficult in Poland in the early part of the twentieth century and in an attempt to better his prospects Jonas sought to immigrate to a country that offered greater opportunities.  He arrived in Melbourne in 1927 with £50 in his pocket.  He tried his hand at several jobs, including motor mechanic, lace maker and cigarette paper manufacturer.  Eventually he opened a family printing business.  In 1929 he married Sara Dabscheck with whom he had three children, Bernard, Eva and Jack.

From the time he arrived in Melbourne, Jonas became involved in the life of the Yiddish community.  He joined the Kadimah serving as its treasurer in 1943 and continuing as a committee member for many years, representing the organisation at the Board of Deputies.  He became treasurer of Carlton Shule (synagogue) and was one of the founders of the Polish Jewish Relief Fund in the late 1930s.

From 1943 until the early 1970s, Jonas served on the Board of Jewish Welfare in different capacities:  as an executive member in 1943-44, vice president in 1944-45, and again in 1952-1956 and honorary treasurer from 1947-1950.  He served as a Jewish Welfare Board member and trustee for over three decades.  He was also a trustee of the Montefiore Homes, Carlton Shule (synagogue) and the Yeshivah.  He provided financial and in kind support for Yiddish writers such as Pinchas Goldhar, Yehoshua Rapaport and Herz Bergner.  He also sponsored the arrival and resettlement of new immigrants in the pre and post war period and was on the original committee that established Mount Scopus College in the late 1940s.